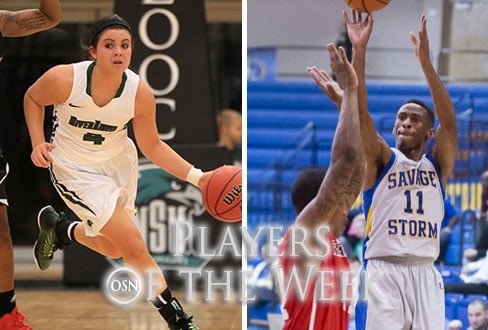 This week’s Players of the Week are Fontana Tate from Northeastern State and Taylor Smaller from Southeastern.

Tate was a steady force for the RiverHawks, who moved their winning streak to four games, doing so by beating two non-conference in-state opponents in Southwestern and Rogers State.  Tate had 13 points in both games and averaged 5.5 rebounds and four assists in the two contests.  She shot 40 percent from three-point range as well, while averaging 30 minutes on the court.

It was a very big week for the Savage Storm.  Southeastern pulled off one of year’s biggest upsets with a win at Division I Tulsa. Smaller had 18 points, four rebounds and three steals and was 3-for-6 from outside the arc.  His play may have been even bigger at home against Northwestern on Saturday.  Smaller had a game-high 19 points and was 5-for-10 from long range and this included the game-winning three-pointer with 0.4 seconds remaining in overtime to give the Storm a 70-67 win in conference play.