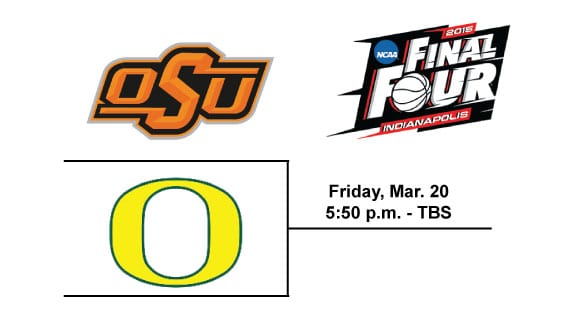 Joseph Young scored a game-high 27 points, including 15 consecutively for the Ducks, as Oregon defeated Oklahoma State for the second time in three years in the opening game for both teams in the tournament. Meanwhile, Phil Forte was only 1-of-7 from behind the arc for OSU.

• OSU’s third trip to the NCAA Tournament in last four years. 27th appearance overall. Lost last year in the second round to Gonzaga, 85-77.
• Le’Bryan Nash has scored in double figures in all 30 games he played in this season and has led the team in scoring in nine of the last 10.
• OSU has lost six of last seven games coming into Friday’s game.

• Third straight NCAA Tournament appearance and 13th overall.
• Joseph Young is the Pac 12 Player of the Year and averages 20.2 ppg to lead the league. Young has 1,331 points in last two seasons – most in school history over a two-year period.
• Young comes in with momentum, having scored 74 points through the three games in the Pac 12 Tournament.