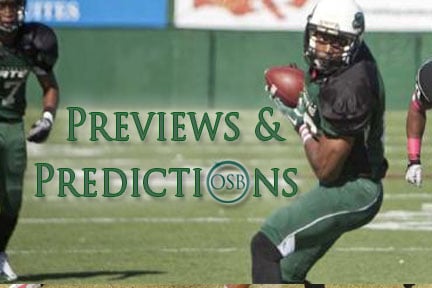 In our first weekend of picks, Matt and I got there through different routes, but we both wound up at 9-4.  We’ll try it again this weekend with all 14 teams on the docket and our first intra-state matchup.

Tulsa (1-1) at #14 Oklahoma (2-0)
Would anyone have thought it possible that a QB change in Norman would NOT be the sports talk of the state for a given week.  Sports Illustrated is to thank for that.  In case you didn’t know, Blake Bell will be making the start for the Sooners, in for the injured Trevor Knight.  The ground game should be strong with Bell and Brennan Clay had 170 yards rushing last week, as well. The Sooners’ defense has made its presence felt in giving up only seven points in the first two games.  Meanwhile, Tulsa swept C-USA weekly awards, led by Trey Watts.  Watts was the offensive POW with 152 yards rushing and a clutch 45-yard carry to set up the winning score.  OU leads the all-time series 17-7-1.
Joey’s Pick: OU 31-10
Matt’s Pick: OU 27-3

Lamar (1-1) at #12 Oklahoma State (2-0)
The Cowboys will be playing the Cardinals, but the chant “Beat S-I” will be ringing through Boone Pickens Stadium.  Oh yeah, there’s a game to be played this week.  Funny how that got lost in all of the uproar, which is sound and fury, told by an idiot, signifying nothing (Shakespeare-ish).  But I digress.  This is the first meeting between the schools.  Lamar has never lost a game in eight tries to a school from Oklahoma.  Have I given any actual preview stuff for this game?
Joey’s Pick: OSU 62-14
Matt’s Pick: OSU 48-17

#16 Pittsburg State (0-1) at Central (0-1)
Pitt State won this one last year in Pittsburg, 34-19, but this year it’s in Edmond.  Joshua Birmingham continues his assault on the UCO record books and the offense put up more than 500 yards last week, but the Broncho offense will need support from the defense.  PSU put up 582 yards in the season opener and had three rushing TDs and three passing TDs.  In his debut, Marquez Clark had a big day with 212 all-purpose yards.  The Bronchos need to get back on the winning track at Wantland Stadium, going 1-4 there in 2012.
Joey’s Pick: PSU 35-27
Matt’s Pick: PSU 38-24

East Central (1-0) at Southern Arkansas (0-1)
The Tigers’ four interceptions recorded last week was tops in D-II and Qumain Black was named the GAC Defensive POW.  How does ECU follow this?  It’s the first road test for ECU and it will come against an SAU team that was surprised last week at SOSU.  The Muleriders blanked East Central, 19-0, in 2012, but the young Tigers’ offense has had a year to mature.  Quarterback Spencer Bond threw for only 73 yards last week, however, the Tigers had two backs (JoJo Snell and Justin Todd) that combined for 198 yards on the ground between just the two of them.
Joey’s Pick: ECU 34-32
Matt’s Pick: ECU 24-17

Missouri Southern (1-0) at Northeastern State (0-1)
NSU quarterback Johnny Deaton suffered a leg injury in the opener and Thor Long came on in relief.  The job is his for today at least.  He completed six passes last weekend and will need more for a win against the Lions.  Joel Rockmore needs another big day, and although Langston Jones recorded yet another double-digit tackle day last week, the defense can’t be on the field for as long in this one.
Joey’s Pick: MSSU 38-28
Matt’s Pick: MSSU 35-21

Northwestern (0-1) at Harding (0-1)
It’s the Rangers’ turn to face the triple option attack of the Bisons.  NWOSU gave up more than double the yards it produced, though it had no turnovers on the evening – a good note for a team with a roster that has 52 true or redshirt freshmen on it.  Reid Miller is still looking for his first touchdown pass, going only 11-of-33 for 90 yards passing against ATU. It’s the first meeting in 25 years for these schools.
Joey’s Pick: HU 34-21
Matt’s Pick: NWOSU 24-21

Adams State (1-0) at Panhandle State (1-1)
The OPSU offense has had its ups and downs against two vastly different programs, but will have to step it up this week against the Grizzlies’ defense that gave up only 59 yards against Wayland Baptist last week.  The Aggies’ had a pretty good defensive performance as well against Sterling, but Adams State poses a bigger threat, putting up 557 yards last week.
Joey’s Pick: ASU 35-21
Matt’s Pick: ASU 44-14

Southeastern (1-0) at Arkansas-Monticello (0-1)
The Savage Storm are coming off a huge win in Durant last Thursday night.  And redshirt freshmen Devlon Wortham burst onto the scene with 240 yards rushing.  Wortham and SOSU punter Jared Heim earned GAC weekly honors this week for their performances.  This week on the road, the Savage Storm face a team that gave up 46 points last weekend to ECU.  If the Storm offense can on the field long enough, it will lend to the success of a defense that is already thought to be a strength on this team.
Joey’s Pick: SOSU 41-24
Matt’s Pick: SOSU 28-14

Ouachita Baptist (0-0) at Southern Nazarene (0-1)
It’s one of the latest starts in the country for a schedule as OBU is playing its season open today in Bethany.  The Crimson Storm have had a week to recover from the big loss to Henderson State in their opener.  SNU will not be facing as powerful an offense as it did last week (HSU put up 855 yards), but the Tigers do have weapons.  Dylan Terry passed for 223 for the Storm last week, but the SNU ground game will need to produce more this week.
Joey’s Pick: OBU 35-21
Matt’s Pick: OBU 33-12

Southwestern (1-0) at Arkansas Tech (1-0)
The Bulldogs hope to avenge a tough 45-37 loss to ATU last season and also look to stop an eight-game road losing streak.  The SWOSU defense did its part last week against the Harding triple option, but will have to switch gears this week to take on a Wonder Boy air attack that put up 299 yards on NWOSU last week.  Southwestern signal caller Dustin Stenta accounted for all three of the Bulldogs’ touchdowns in the 27-23 come-from-behind win over Harding – two passing and one rushing.  Tech leads the overall series, 5-4.
Joey’s Pick: SWOSU 31-20
Matt’s Pick: ATU 24-14

Southwestern (Texas) (0-1) at Bacone (1-1)
It’s the first of two opponents for the Warriors that haven’t fielded football teams in more than half a century.  The D-III Pirates, whose roster is comprised entirely of freshmen and sophomores, lost in the season opener to Texas Lutheran.  Bacone is seeing productive numbers from its offense and both quarterbacks, Kyle Kuban and Karl Birkenfield, but the defense has given up 86 points in its first two games.
Joey’s Pick: BC 42-24
Matt’s Pick: BC 28-14

Langston (0-1) at Incarnate Word (1-1)
The Lions travel to San Antonio this weekend to face their second consecutive D-I opponent.  With a week off, Langston coach Dwone Sanders said his team has been focusing on finishing.  The Lions will need to finish their drives and keep the Cardinal offense on the sidelines.  UIW put up 69 points against Texas College last weekend.
Joey’s Pick: UIW 35-21
Matt’s Pick: LU 34-24

Oklahoma Baptist (0-2) at Fort Lewis (0-1)
The Bison go on the road for the first time this season to face the D-II Skyhawks in Durango, Colo.  OBU swept the weekly CSFL awards, even though it came up short last week in the game, due to some great individual performances.  Those need to translate to a win today against a Skyhawks team that is also in need of a win.  How will the young Bison fare today away from home?
Joey’s Pick: OBU 24-23
Matt’s Pick: OBU 21-20