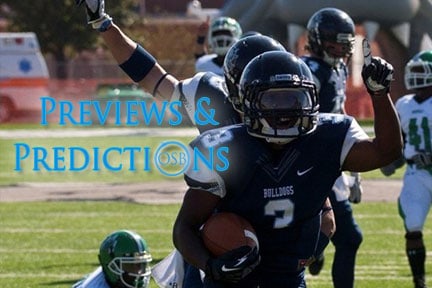 No Division I games this week in the state this weekend and Oklahoma Baptist gets a break this weekend, too.  Don’t worry, though, it will be only for a week and not another 73 years.
I had a pretty good record last weekend (10-3) and in every game in which Matt (7-6) and I differed, I won.  This is probably not something that will trend.
Overall in 2013: Joey 19-7, Matt 16-10

Emporia State (2-0) at Central (0-2)
The Bronchos lead this series 9-4-1 all-time, but the Hornets took last year’s contest, 42-14, in Emporia.  Joshua Birmingham rushed for 152 yards and a score last week and will need to continue to pick up yards and pace the offense for UCO to stay in this one.  His next score will give him sole possession of the Bronchos’ career scoring record.  ESU quarterback Brent Wilson is completing passes at a 69.8 percent clip for 299 yards per game.
Joey’s Pick: ESU 42-27
Matt’s Pick: ESU 44-14

Ouachita Baptist (1-0) at East Central (1-1)
East Central earned the 37-27 victory over OBU last season when the Tigers from Arkadelphia were ranked nationally.  It’s not last year, but last week that is on the mind of the ECU Tigers.  East Central gave up 50 points last week against Southern Arkansas.  OBU running back is starting 2013 strong with three TDs in his first outing.  The defense will need a repeat of the performance it gave in the first game this season and Spencer Bond and the offense will have to produce.
Joey’s Pick: ECU 31-28
Matt’s Pick: ECU 34-24

Washburn (2-0) at Northeastern State (0-2)
The RiverHawks had a debut at quarterback last week and will get a new starting tailback this weekend.  Joel Rockmore had an ACL tear, meaning Terrance Dixon and Steven Hopper should get some carries.  Although the running backs will be called upon to help shoulder the load, Thor Long will need to have a better outing than 8-of-17 passing.  Langston Jones took home the MIAA Defensive POW last week after logging 21 tackles.  Washburn won a tight one last year, 24-20 in Topeka, and leads the series, 2-1.
Joey’s Pick: WU 20-14
Matt’s Pick: WU 35-14

Northwestern (0-2) at Arkansas-Monticello (1-1)
UAM stopped an 11-game losing streak with its upset of Southeastern last week.  Northwestern will need to restart its offense to keep the Boll Weevils from turning that into a 2-game winning streak.  The status of each of the two quarterbacks listed on the depth chart as No. 1 and No. 2, Reid Miller and Jake Streck, is still in question, meaning third-stringer L.T. Pfaff may see action again this week.  This could be a game that sees each team score a lot or a 0-0 game that goes into overtime.
Joey’s Pick: UAM 20-10
Matt’s Pick: UAM 24-14

Oklahoma Panhandle (1-2) at #11 Montana (2-0)
The Aggies had a solid showing last week against a perennial D-II powerhouse.  This week, OPSU has to face a perennial FCS powerhouse.  Yes, that’s D-I.  A ranked FCS team, Montana has outscored its opponents 83-20 in its first two games and running back Jordan Canada has posted two 100-yard rushing games.  For OPSU, Chris McClendon will need to build on what is starting out as a good season for the sophomore.  This is the first meeting between the schools.
Joey’s Pick: UM 52-21
Matt’s Pick: OSPU 49-42

#9 Henderson State (2-0) at Southeastern (1-1)
The Reddies have outscored their opponents 157-24 in two contests this season.  There doesn’t seem to be a reason to think HSU won’t put a good amount of points on the board again this week.  The Savage Storm offense will need to do its part to try to match the Reddies in Durant.  SOSU scored 56 in the opener at Paul Laird Field.  Devlon Wortham is averaging 156 rushing yards per game and his contribution may open up the passing game for the Storm at home.  Henderson State has won the last three in the series.
Joey’s Pick: HSU 56-28
Matt’s Pick: HSU 42-35

Arkansas Tech (1-1) at Southern Nazarene (0-2)
Southern Nazarene has a rough greeting into a full GAC schedule.  SNU has given up 131 points in its first two outings.  One positive for the Storm is that the offense scores when it gets its chances in the red zone – SNU is 6-for-6 in those opportunies.  Arkansas Tech will be coming at the Crimson Storm through the air.  Luke Halpin has 286 passing yards per game.  This is the first meeting between these schools.
Joey’s Pick: ATU 34-24
Matt’s Pick: ATU 38-14

Southern Arkansas (1-1) at Southwestern (2-0)
Likely the game of the week in the GAC.  Southwestern has lost both previous contests against the Muleriders, including last season’s 35-34 SAU victory in Magnolia.  SWOSU is trying to make to 3-0 for the first time in more than two decades.  Muleriders’ QB Tyler Sykora is passing at a clip of 331 yards per game and his team has scored 50 points in each of its first two games.  D.C. Walker has been flirting with the century mark rushing and may need to hit it for the Bulldogs to grab the big home win.
Joey’s Pick: SWOSU 38-37
Matt’s Pick: SAU 25-14

Bacone (2-1) at Lamar (1-2)
Lamar is completing the trifecta this weekend of playing a D-II team from Oklahoma (OPSU), a D-I team (OSU) and now an NAIA team in one season.  The Cardinals’ loss to OSU last weekend was the first loss in school history to a team from Oklahoma (8-1). The Warriors are still using two quarterbacks and sticking with the hot hand, and that has been Karl Birkenfield of late.  Birkenfield is completing nearly 70 percent of his passes and has three TD passes.  This is the first meeting for these schools.
Joey’s Pick: LU 49-27
Matt’s Pick: LU 54-14

Langston (0-2) at Nicholls State (1-2)
Third game, third Division I opponent for the Lions.  It’s the first meeting between the two and this will be the home opener for the Colonels.  This might be the game for the Lions’ ground game to get going as NSU has given up 395.7 rushing yards.  LU’s defense has been holding its own against D-I opponents and will need to do so again this weekend.  Chace Green and Isaiah Ross are averaging in double digits in tackles.
Joey’s Pick: NSU 35-14
Matt’s Pick: NSU 38-14