Rackley struggled through adverse conditions at State, but hungry to continue to grow 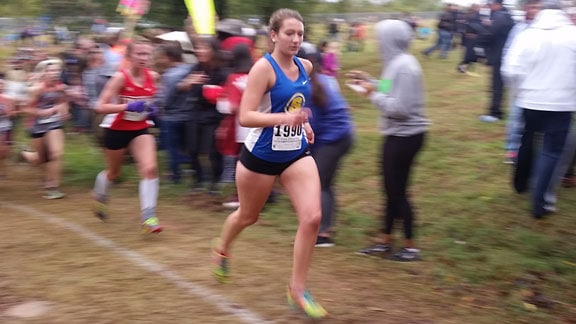 Those are not the most desired weather conditions for a cross-country meet, but Stillwater junior Elise Rackley and 111 other runners from around the state had to endure them for the Class 6A State Championship at Edmond Sante Fe High School on Saturday.

Sand Springs’ Cheyenne Walden won the 5-kilometer race in 17 minutes, 57 seconds, and Bartlesville won the team championship with 45 points, 25 ahead of second-placed Norman.

“It’s a tough day to run when the conditions are like that, but it’s not always about time, and it’s not even all about placing sometimes,” Crynes said. “It’s about your effort.”

The rain subsided midway through the race, leaving behind a muddy course for the runners to navigate, which had an adverse effect on Rackley and her time. Rackley ran 1:19 slower than her personal best, which she ran at the regional meet last week.

“There wasn’t as much balance in my step,” Rackley said. “It was more of trying to go fast; it was harder to go fast.”

Crynes said he knows Rackley is disappointed she didn’t run another personal best, but she needs to put things into perspective.

“Our kids come off a [personal best], and they want to do the exact same thing the next week and then get a little disappointed when their times go down,” Crynes said. “The good thing about Elise is she’s a junior; she has another year.”

The structure of the course also affected Rackley. For most of the course, the trail had a width of only a few feet, and when more than 100 runners try to run through one space, room becomes sparse.

Rackley said the course’s narrowness made it hard to pass people, which made the race more physical.

“When we were going at the start, for about a mile you couldn’t pass anyone very well,” Rackley said. “You had to like push your way through, which you’re not really supposed to do, but you can get boxed in a lot in the beginning and even throughout the whole race.”

The most difficult part of the race for Rackley came in the wooded area on the west side of the course. Not only because of the cramped space, but also because of its segregation.

“There’s just a bunch of trees, and you can’t see the people cheering for you,” Rackley said. “It’s muddy, and you think like, ‘I can slow down and just chill for a minute,’ but you can’t.”

Crynes said Rackley’s greatest strength is her character, and she will continue to improve heading into the track season.

“Watching her watch the awards ceremony, you can tell there’s a hunger in her eyes,” Crynes said. “We’ll take about a week and a half, two weeks off and then start building miles again for indoor and outdoor track.”