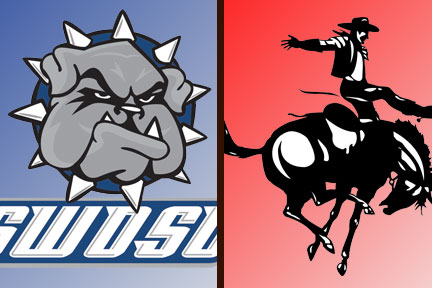 “I thought early on our guys were just too amped up. We missed free throws and we rushed some stuff,” said Northwestern head coach Andrew Brown. “We had a former Ranger basketball player in the locker room at halftime who echoed that. He told them ‘They’re out-hustling you. They’re out-toughing you, and it’s time to get back to who you are.'”

Northwestern topped 50 percent from the field for the fourth time in five games, hitting 50.8 percent of its shots. The Rangers also held Southwestern to just 46 percent shooting.

Just as importantly, they found ways to get to the foul line. After a dreadful first half of free throws, in which they missed eight of 13, the Rangers knocked down 17 of 21 in the final 20 minutes.

Northwestern turned the ball over just nine times and had seven different players combine to produce a season-best 12 steals.

For decades Northwestern and Southwestern enjoyed one of the state’s great rivalries, routinely playing to packed houses. Saturday’s meeting was just the third since the breakup of the old Oklahoma Intercollegiate Conference. Southwestern jumped to the NCAA following the 1996-97 season, ending a 70-year run.

Or perhaps “pausing” would be the better term. The first Great American Conference encounter between the two felt just like old times – especially down the stretch.

With Freemyer and Wright facing first-half foul trouble, the Rangers never found much of an offensive rhythm but still went into the half tied at 37.

Northwestern led the first 11 minutes coming out of the break before Marin Zelalija hit his fifth trey of the night – on his way to a team-high 15 points for Southwestern – to give the Bulldogs their first lead of the second half. It would turn out to be their only lead of the half.

Freshman Laakeem Henderson immediately answered with a three of his own to put the Rangers right back in front, 66-64.

An emotionally -charged second half featured one intentional and four technical fouls, but Northwestern was also able to channel some of that intensity in positive ways. Defensively, the Rangers clamped down. After briefly falling behind, they held Southwestern to just one field goal over the next eight minutes.

Ryan Donahoe missed a pair of free throws that could have tied it at the 7:44 mark. Jonathan Freemyer made the Bulldogs pay on the other end, going inside and tipping home his own miss for a four-point edge.

Eze Akwari forced a steal seconds later and fed a pass off the backboard to a trailing Smith for a thunderous dunk, whipping the Percefull crowd into a frenzy.

Northwestern fed off that momentum, scoring on its next two possessions. Henderson came up with a steal and Freemyer zipped a bullet pass to Akwari underneath the basket for two more. Glover hit a jumper and, in just three minutes, the Rangers had gone from down one to up eight, 74-66 with 6:10 remaining in the game.

“We didn’t win those battles in the first half. They out-hustled us,” Brown said. “But I think what you saw there was a Northwestern team that just really wanted to win.”

Southwestern trimmed the lead to five with just over three minutes play before Smith ran down a loose ball and scored on a nice hustle play. Wooley collected another steal, and Freemyer knocked down a trey to make it 83-73 with 1:30 left.

Northwestern drained seven of eight at the free throw line to ice it.

With the win, the Rangers leaped both Southwestern and Southeastern Oklahoma State and now have sole possession of third place in the GAC standings at 6-4. Northwestern trails Arkansas Tech (7-4) by half a game and is two and a half games back of league-leader Harding (9-2) at the midway point. Tech and Harding each visit Alva during Northwestern’s next home stand (Feb. 7 and 9).

First, another trip east. The Rangers travel to face Arkansas-Monticello and Southern Arkansas next week.

Bryan Holmgren is the Director of Athletic Communications at Northwestern Oklahoma State University.