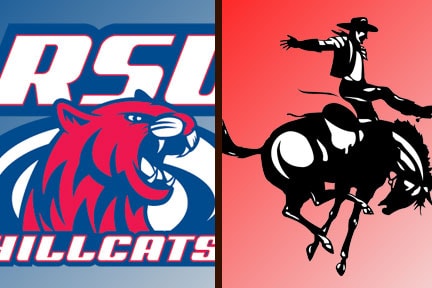 ALVA, Okla. — Rogers State is no longer a conference date on the Northwestern Oklahoma Schedule, but that didn’t appear to change the Rangers’ effort level. It certainly didn’t take anything away from the satisfaction they felt afterward.

“They beat us a month ago, so we needed to fix that. Second of all, you beat a very, very good, well-coached team like Rogers State, you’ve got a reason to feel good about yourself,” said Northwestern head coach Andrew Brown “We didn’t play our best. We still have to find ways to get better, but I thought we did a very good job of making plays when it mattered.”

Five Northwestern players finished in double-figures, led by 21 points from Jonathan Freemyer. Daryl Glover scored 13 points and handed out eight assists to go with 11 points and a team-high eight rebounds from Bruce Wright. Brandon Wooley had a career-high 13 points, and Marshall Bell added 11 off the bench.

Northwestern played from in front over the first 10 minutes of the game. Glover drained a jumper, Bell hit a three and Jesse Smith scored on a putback to cap a 7-0 Ranger run, good for a 17-10 lead.

Over the next three minutes, RSU – slotted fourth in this week’s NAIA National Rankings – responded with a 14-2 spurt to go in front for the first time. They carried a six-point lead into the break.

“We were rushing and forcing shots. Give our kids credit. I thought we played much more efficiently on offense [in the second half], and we did a much better job of making them take contested shots.” Brown said.

After RSU went up by eight points – its biggest lead of the night – at the 18:22 mark, the Rangers began hacking away at the deficit. They would connect on each of their next four possessions, getting back-to-back buckets from Wooley, a big score inside from Freemyer and a fastbreak layup from Glover to tie the game at 43.

RSU briefly pushed its lead back to six, but the Rangers answered again. Freemyer had a nice stretch with just inside of eight minutes to play. He caught a back-door lob from Glover for an alley-oop slam. On the next trip to down, he drilled a trey to put Northwestern right back in the thick of things.

The game remained close the rest of the way. Northwestern took a 66-63 lead on a Bell three-pointer, but Donald Williams answered 30 seconds later with a three of his own to knot the game at 66.

Tied at 68 with 1:54 to play, Freemyer took a feed from Wooley and found himself all alone under the goal for another dunk and a 70-68 Northwestern lead. The Rangers would never trail again, despite going the rest of the way without a field goal. Instead, they sank 6-of-8 free throws and turned up the pressure on defense to salt the game away.

“I thought our guys really fought and won the toughness battle,” said Brown. “In the second half with the game in doubt, our guys made plays.”

With finals week looming, Northwestern (4-4) is off for the next 10 days before returning to Great American Conference play at Southern Nazarene on Dec. 18. The Rangers (2-0 in GAC play) are one of just two remaining conference unbeatens.

Northwestern’s next home action isn’t until Jan. 10 when it hosts East Central.

*The Rangers have shot 60 percent or better in the second half of three-straight game – all victories. Saturday, they made 16-of-26 second-half shots, good for 62 percent..

*Freemyer has topped 20 points in four of Northwestern’s eight games this year. His scoring average of 18.5 points per game ranks fourth in Great American Conference.

*Wooley set a new career-high with 13 points. His previous best of nine points came against Friends University (Kan.) in November of 2010.

*Glover’s eight assists makes for a nice night, but it’s quickly becoming just another day at the office for the senior point guard. He’s tallied 21 assists over his last three games. That includes a career-high 10 in a Nov. 29 win over Southern Arkansas.

*Northwestern’s current three-game winning streak is its longest since late in the 2010-11 season, when they put together three in a row over St. Gregory’s, John Brown and Oklahoma Baptist. The latter two wins came in the Sooner Athletic Tournament, vaulting the Rangers into the title game. Northwestern’s last six-game streak came at the start of the same season, when they opened 6-0.

Bryan Holmgren is the Director of Athletic Communications at Northwestern Oklahoma State University.