Kingston Redskins may be ahead of schedule 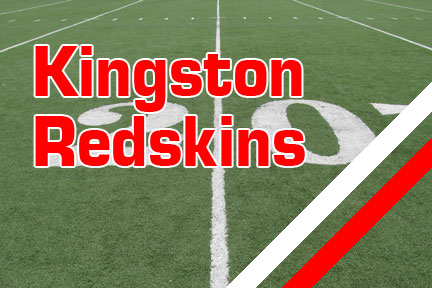 The Redskins will be a force to deal with come playoff time, according to Kingston head football coach John Caraway.

He has a seasoned team of several returning juniors and seniors, led by QB Noah Hodges, WR Paden Hayes and sophomore RB Cody Flescher.  Caraway also pointed out the defense, which has allowed only 13 points total and averaging a mere 86 yards per game on defense.

Caraway said he believes his team is ahead of schedule.  He loves the effort his team puts in but wants to see fewer mistakes with penalties and turnovers.  He said the next three weeks are key for playoff positioning, beginning with this week at Marietta.  He feels aside from Madill, Marietta is their biggest rival and they need to be prepared, despite Marietta’s 0-3 start.

Caraway truly believes his Redskin team will make a deep playoff run this year. He made a goal for this team: If they are practicing on Thanksgiving week, “we have done a great thing”.  He has circled the game against Davis on Oct. 31 because that will be his measuring stick.

He has great things planned for Kingston football, but above all else, he wants respectful young men that play hard, play right, and get their education.  This coach truly has Kingston on the right path to a potential state title.  But win or lose, this coach is doing it the right way.