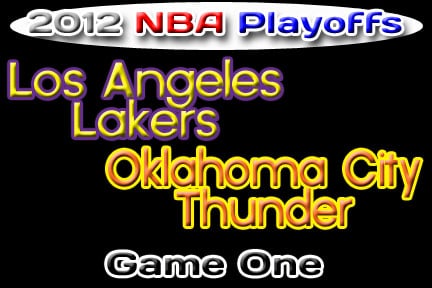 Many people had questions about whether the nine days of rest between Round 1 and the Western Conference Semifinals would help or hurt the Oklahoma City Thunder, but OKC came out and administered a thorough beating to the Los Angeles Lakers in game 1 in a 119-90 victory.

Los Angeles managed to grab the lead in the first quarter, but the Thunder responded with a run of their own that extended well into the second half.

After the last time these two teams met, which led to Metta World Peace’s seven-game suspension and James Harden’s concussion, the anticipation for this series and this game could not have been much higher.  The fans in Chesapeake Energy Arena did not have a warm welcome for World Peace, and the Thunder players made sure that the night did not end like he wanted, holding him to only 12 points.  In this game, however, it was a different Laker who was ejected.  The referees kicked Devin Ebanks out of the game after he and Thunder guard Royal Ivey were each issued technical fouls.

The Thunder’s big three showed up, scoring 69 of the teams 119 points.   Russell Westbrook led all scorers with 27 points, followed by his fellow All-Star Kevin Durant with 25.  The OKC bench made a huge contribution, outscoring the Lakers’ bench, 50-26.  On the night that he was presented with the trophy for winning the NBA’s Sixth Man of the Year Award, James Harden scored 17 points.  When Kendrick Perkins re-aggravated his hip injury, Thunder bigs Nazr Mohammed, Nick Collison, and even Cole Aldrich played well on Monday night.  For the Lakers, Bynum and Gasol combined for 30 points and 21 rebounds on the night.

The most impressive stat, however, is probably OKC’s four turnovers.  For a team that ranked last in the league for turnovers during the regular season, the Thunder have done a much better job of valuing the ball in the playoffs.  Coach Scott Brooks said, “You can’t say it enough about the turnovers, four turnovers, that’s huge.”

The Thunder take a 1-0 series lead with this win, and but the Lakers will try to even things up in Game 2 on Wednesday night at 8:30 p.m. in Oklahoma City.