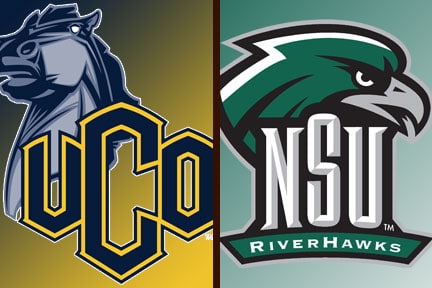 TAHLEQUAH – The Northeastern State baseball team came from behind to earn a 10-9 walkoff win over Central Oklahoma in 14 innings Wednesday afternoon at Rousey Field.

Junior Dakota Woods drew a four-pitch, one-out walk and tied the game on a triple from sophomore Michael Rhea. Redshirt freshman Zane Takhar walked off UCO when he laid down a perfect suicide squeeze bunt that allowed Rhea to score the game-winning run.

The outing was the longest for the RiverHawks since they defeated these same Bronchos 7-6 in 16 innings on April 27, 2008. There have been just four games in all of NCAA Division II this season that have lasted longer than 14 innings.

The visiting side took control of the game early and led 6-1 after batting in the second frame. NSU was able to get two back in the bottom of the second on a two-RBI double from senior Shane Bridges.

Central Oklahoma tacked on insurance runs in both the fifth and sixth innings to move ahead 8-3, but Northeastern State was able to score the final five runs of regulation to send the contest into extras.

Senior Gabriel Wurth recorded an RBI groundout to plate senior Charles Sims in the sixth. Woods and senior Cody Begovich had RBI hits in the seventh to cut UCO’s lead down to 8-6, and Bridges belted a two-run homer in the eighth to tie the game.

The pitching took over from there, as neither side scored again for the next five frames. That was until the 14th, when the RiverHawks were able to post the walkoff win over their rivals.

Senior Eric Kirkpatrick and junior Bryce Davenport both went 3-for-7 to lead NSU at the plate. Bridges had a pair of hits and tied his career high with four runs batted in. Kirkpatrick and Sims both scored twice.

Junior Zach Poehl (3-1) pitched the last three innings to earn the victory on the mound. He allowed one run on three hits, while striking out two and issuing no walks. Junior Kyle Emmons started the game and lasted 1.2 frames. He allowed six runs on five hits. True freshman Zach Parish and juniors Daniel Faulk, Bobby Sehgal and Zack Hammock all threw in relief. Hammock needed just 46 pitches to get through 4.0 innings. He did not give up any runs and only allowed one hit.

Jake Dyer and Jon Kamies went 4-for-7 for UCO, while Landon Eason had a 3-for-7 day. Kamies drove in three runs, and Eason posted two RBI and two runs.

Shawn Troutman (1-3) suffered the loss after giving up the game-winning runs. He allowed two runs on one hit in 2.1 frames. Austin Stewart started for the Bronchos and conceded three runs on five hits in three innings.

NSU will remain at home for a weekend series against No. 13 Central Missouri. The first contest is scheduled for a 2 p.m. start April 22 at Rousey Field.