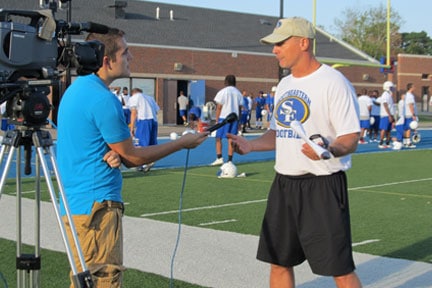 New faces, a new conference and renewed excitement for the football program were among the topics when Southeastern held its Fall Sports Media Day on Sunday.

Southeastern head coach Ray Richards is entering his 30th season in the coaching ranks in 2011.  He’ll be doing it with many new faces seeing time on this year’s squad.  Only eight starters are returning (five offensive, three defensive) from 2010.  And of the seniors that will suit up this year, only five have done so in a Savage Storm uniform for more than one season.

But Richards is enthusiastic about what is ahead.

“We’re very excited about this upcoming season,” Richards said. “I don’t think there’s a team on our schedule that we can’t beat.  And probably likewise there’s not a team that couldn’t beat us.  But our plan is to win them all and I really believe we can do that.”

The Savage Storm comes in to the new season with a fresh outlook as they started practices this week.  SOSU is also beginning its first campaign as a member of the new Great American Conference.  And they are going at it with something to prove.

In the recent preseason coaches poll, Southeastern was picked to finish No. 8 in the GAC.

“Being picked eighth out of nine teams kind of put a chip on our shoulder,” Richards said.  “Our goal is to earn respect and to go take that respect.  And you’ve got to do that by executing extremely well and giving great effort and being relentless in the things we do.”

Southeastern finished 2010 with a 3-8 record.  It was the lowest win total in a decade.  Richards said close losses in 2010 were among things added to the disappointment.

“And the other thing we weren’t able to do last year was that defensively, when it was third down and we needed to get off the field, we couldn’t do it.”

However, he added that he thinks this year the team will produce different results.

“I think that we are more talented and I think we’re more committed to being disciplined,” Richards said.  “So I think that we’re going to get off the field on third down and get the ball back.

“And I think we’re more conscientious about taking care of the ball.  And obviously time will tell.”

Not every player for the Savage Storm is a new one, though.  Senior offensive guard Ryan Sullivan is a three-year letterman and one of three of the offense’s returnees who plays on the offensive line.  He has also garnered preseason All-America honors.

He said the honor is a humbling experience.

“It reminds me of how blessed I am,” Sullivan said.  “It definitely gives me a lot of motivation to go out there and work even harder.”

Sullivan is also a hometown product who played for Durant High School.  This will be the last of eight consecutive seasons to for him to play his home games on Paul Laird Field.

“I’ve played a lot of football games out there and made a lot of memories,” Sullivan said.  “I wouldn’t have it any other way.  I really enjoyed be able to play out there in high school and then be able to turn right around and spend my college career here.”

Richard said he excited about what the upcoming weeks have in store for him and for the program.

“In terms of just the guys on the team, I can’t think of a better group of young men to work with,” Richards said.  “We knew it this past spring.  We, as coaches, talked and said, ‘Man, this is really a great group of guys.  They’re high character guys and they are motivated to win.’

“And with us being eighth, it just put a chip on our shoulder and I think it just put fuel on the fire.”