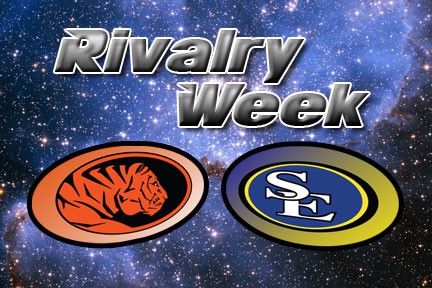 It’s been called the Best Small College Rivalry in Oklahoma.

Among the reasons this might be the case, apart from the animosity felt on both sides of the Southeastern and East Central rivalry, is this set of numbers:

That’s as even as a series can get.

In just the last 15 years, each team has derailed a potential spot in the playoffs for its opponent on the final game of the season, and more than once.

And although neither has a remote shot at the postseason this year, the desire to come out on top on Saturday in Durant is very strong.

“We have over 40 kids on this football team that are from basically an hour from Ada.  So there are a lot of kids that are well aware the rivalry.  And the ones that don’t know will find out really fast.  It’s “marquis”ed up there and you’ll find out about it really fast.

“You hear about it everywhere you go.”

And McCarty said the intensity of this game should be no different.

It’s the classic statement – you can throw the records out the window.  It’s a one game season.

And McCarty is not taking his opponent lightly.

“Number one, we have tremendous respect for them and their program.  They’ve had a tough year, but the thing is that they’ve been in every ballgame.  They’re physical and they’re well coached.  Their kids play hard and they play hard on tape.”

And the magnitude of the game

“It’s an evenly balanced record and two schools that are about 70 miles from each other and have a long history.  It’s going to be a physical game.”

East Central (4-5) is also playing for bragging rights in the state.  The Tigers are 3-0 against the other state schools they’ve played (NWOSU, SNU and SWOSU).  A win on Saturday would give ECU a sweep.

“We’ve been fortunate to do that for the last couple of years,” McCarty said.  “You always want to win your home state.  That’s important at even the highest levels.

“You want to do well at home and then move forward from there.  We have a lot of players from Oklahoma on this team and so it’s important for us.”

That final opponent from the home state is the one that fans from Ada want most to claim victory over.

And this season hasn’t been easy for the team from down the road.

Southeastern (2-8) hasn’t been on the winning end of most of its contests, but maddeningly close week in and week out.

SOSU coach Ray Richards said that his team is just right there.

“We’ve played with everyone,” Richards said.  “They’ve been close games.  We just have to find a way to win down the stretch.”

Many factors come into play for teams (those winning and those losing) throughout the season.  For the Savage Storm, injuries have been one of those factors.

“We’re playing hard.  We’re kind of thin in certain areas, in terms of our depth and injuries and the like.

“Obviously, we’d like to come up with a few more turnovers.  We had a couple that were big the other day, and they put us in a place where we almost got the win.”

SOSU was trailing Arkansas Tech by 14 in the fourth quarter last weekend, but picked up two big turnovers and sent the game to overtime, where the Storm still fell, 37-34.

But those games are behind and the rivals await this weekend and Richards has been a part of the series for many years, as an assistant and now in his ninth season as the head coach.

And then, it is the final game on the schedule.

“And it’s got local interest because the schools are within 70 miles of each other.  And you have people that have East Central ties and people that have Southeastern ties in the same family.”

Richards said it was also because of that placement of the game on the schedule – at the end.

“They’re all big, but going into that last game because of who it is, yes it’s a big deal.

Both Richards and McCarty tabbed the usual suspects as keys to grabbing the big win Saturday.

“For us, I think it’s probably the same thing we’ve needed to do all year,” Richards said.

“Offensively, we’ve done some really good things this year.  I think it’s a matter of being consistent and taking care of the ball and keeping our turnovers to one or less each game.  “Defensively, we need to prevent a long run or a long pass. And turnovers come into play there, too.  If we could be a plus-two on turnovers and not give up anything big, I think we’ll be in a good position to win the game.”

McCarty spoke about both sides of the ball.

“The turnovers and the field position are going to be the key stats this weekend.”

Kickoff is set for 2 p.m. at Paul Laird Field in Durant.