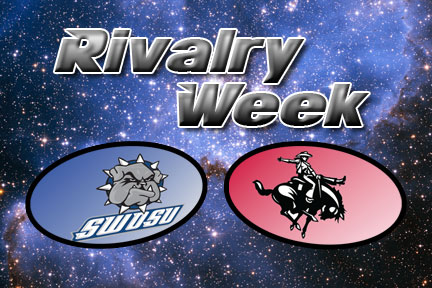 The Southwestern Bulldogs make the two-hour trip almost due north to Alva to renew a near-dormant rivalry with the Northwestern Rangers on Saturday.

This weekend’s contest will be the 80th edition in a series that has the Dawgs leading 48-27-4.

And although the two teams met as recently as 2011, there have been only two other meetings since SWOSU made the move from the NAIA to NCAA Division II following the 1996 season.  And the rivalry between the two took a bit of a hiatus.

“People always ask me when I played here who the rival was,” Cocannouer said.  “And back then it was Central State. That’s just how it was.

“And then they had a little layoff there, so it was pretty exciting two years ago when we got to go up there and play them again.”

Southwestern holds a 4-3 edge over Northwestern through the decade of the ‘90s.

Cocannouer remembers the only meeting he’s had with the Rangers as head coach.

“We got a big key interception right before halftime that led to a touchdown, which really put us over so we could win that ball game, because they a good receiver up there that caught like 15 passes against us.”

The Bulldogs’ Clarence Laster had that interception and returned it 45 yards for a score, while Rangers’ receiver Kent McDonald loomed big for his team.

But Cocannouer said that he recognized the growing pains the 2-8 Rangers are experiencing right now.

“But now they’ve made the transition as far as Division II, and they’re finding out it’s a little bit different and Southwestern found that out the same way when they came up.

“But they’re getting better and better.  And we know that it’s a game that they want to beat us and we want to beat them.”

And it has been a bit of a roller coaster ride for the Rangers and coach Hall for a while now.

“It’s probably been the last year and a half,” Hall said.  “But in terms of us trying to grow this program and moving forward in the Division II process, our plan is to get better every week.  And sometimes that’s not always the case or a possibility when we’re playing the kind of competition we are.  But we try to look for small victories in everything.”

The Rangers are coming off four weeks of ups and downs, wins and losses.  The most recent memory, though, is of last week’s blowout win over Southern Nazarene, 62-17.

“There are goals that our kids are talking about and that we still want to meet,” Hall said.  “And if we can’t win the conference, we want to be one of the better teams in Oklahoma. And we’re certainly at least on track to still have a chance to do that.”

The game on Saturday against SWOSU is another opportunity to build enthusiasm in Alva.

“This is a big ballgame for us and our kids are excited.

“But it’s not as difficult to excite them when you come off a win as opposed to coming off a loss.  I’m anxious to get back on the field.”

But the rivalry aspect of the contest is something that is being rejuvenated following the long absence of meetings.

“The long and short of it is, right now, it’s probably more of a rivalry for the fans and the community and the town than it is for the kids,” Hall said.

“So there is something of an educational factor that goes into this week in preparing our kids that this is, more so than Southern Nazarene, this is our, if you want to call it that, our blood feud.

Even with the growing importance of the single game, Hall is also looking at the big picture of it being the season finale.

But it’s also our last one.  Everyone wants to go out a winner.  Whether you’re going to be 3-8 or 6-5 and I’m sure Coach Cocannouer is telling his kids the same thing.  You remember your last one and that gives you all the momentum, too, going into the spring and into the recruiting season. It’s more than just Northwestern and Southwestern.”

Hall said mistakes and special teams would likely play key roles in the outcome of the game, but also the placement of this game on the schedule could be a factor.

“You know in rivalry games, the first thing you have to do is be ready for the unexpected,” Hall said.

”College football tries to set up those rivalry games for the last week of the season.  And neither one of us has anything, I don’t think, to be worried about postseason-wise, so this is it.

And I’m sure both teams are going to throw out things that haven’t been seen before, so I tell our team to be ready to weather the storm.  No matter what they throw at you, stay true to your basics and fundamentals.”

Cocannouer narrowed in even more on what he wants his team to do.

“Score more than them.”

The forecast for Saturday in Alva shows a high in the mid-70s with 20-plus mph winds – something neither team is a stranger to.

Kickoff is scheduled for 1 p.m. at Ranger Field.