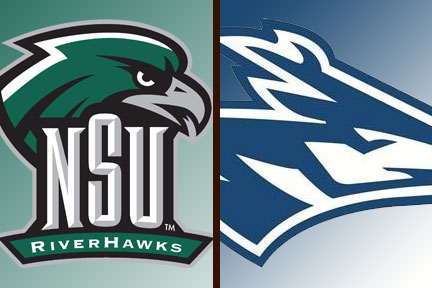 The win for the RiverHawks (1-5, 1-5 MIAA) was the first-career victory for second-year head coach Rob Robinson. The Lopers fell to 0-6 overall and 0-6 in the MIAA.

NSU used explosive plays and a staunch defensive effort to take down the home team. The RiverHawks scored touchdowns on plays of 74, 76 and 85 yards, while holding Nebraska-Kearney to just 199 yards of total offense.

Robinson talked about what the win meant for him.

“Phenomenal, you can’t explain it,” Robinson said. “I didn’t know how I’d feel (when he recorded his first victory). I’m just glad to me it’s not a relief. Coaches always say that if wins come as a relief then it’s not worth coaching. Luckily it’s not a relief. It’s just pure joy right now. I’m so happy for the players. They needed this. They needed it more than I did.”

Leading the way for Northeastern State was Joel Rockmore. The senior running back exploded for a career-high 210 yards rushing and two touchdowns on 18 carries. Junior quarterback Kevin Pantastico finished 7-of-22 passing for 157 yards and one touchdown. Junior wide receiver Matthew Butler had two receptions for a career-high 110 yards and his first-career score.

The first TD of the game came on the first play of NSU’s second possession. Following a UNK three-and-out, Rockmore took a handoff from Pantastico and busted a 76-yard rush to the house. He hit the hole, broke a tackle and outran the Loper entire defense.

UNK tied the contest one minute later when Bronson Marsh connected with Preston Foley from eight yards out. The drive began following an 83-yard kickoff return from Steven Burns.

The RiverHawks then ventured on a 12-play drive to regain the lead, this time by way of a 32-yard field goal from junior Eddie Garcia. The drive initially stalled after the first three plays, but a botched snap on the punt attempt was picked up by senior punter Garrett Powell and ran 14 yards for a first down.

Nebraska-Kearney went three-and-out on its next possession, which set up the longest drive of the season for Northeastern State.

The RiverHawks began on their own 40-yard line and set out on a 14-play, 60-yard drive that took 6:20 off the clock. The drive was capped early in the second quarter by a three-yard rushing TD by Pantastico.

Northeastern State should have been stopped on two separate occasions on the drive, but a roughing the kicker penalty on a punt attempt and an illegal formation penalty on a field goal attempt allowed NSU to keep marching toward the endzone.

The two teams exchanged scores in the final 1:36 of the first half, and the RiverHawks went into the locker room with a 24-14 advantage. NSU’s score came on an 85-yard carry by Rockmore, who had 176 yards rushing in the first half alone.

The Lopers were shutout in the final two quarters as all attempts at a comeback were thwarted. The lone score of the second half came on Butler’s 74-yard pass reception from Pantastico early in the third quarter.

Northeastern State will look to begin a new streak when Missouri Southern State comes to town. The RiverHawks and Lions are set to meet at 1 p.m. Oct. 17 at DeLoache Field.