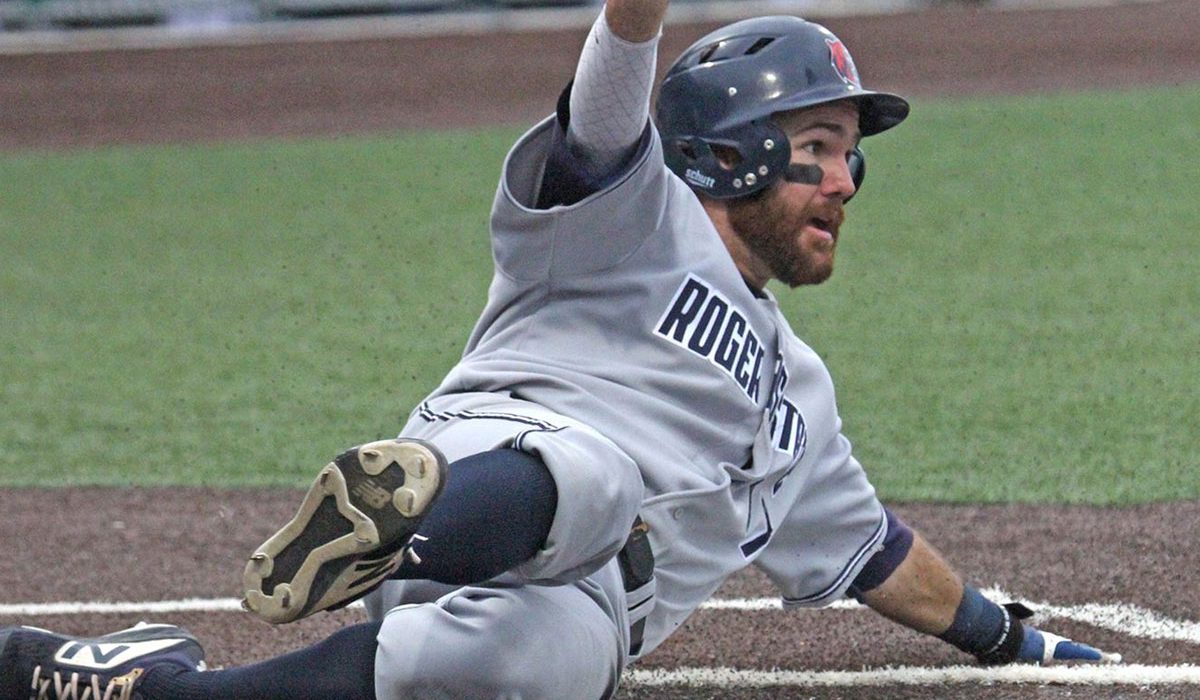 CLEBURNE, Texas – Rogers State advanced to the Heartland Conference Tournament Championship game with a come-from-behind victory over St. Edward’s, defeating the Hilltoppers 6-5 in 11 innings at The Depot atCleburne Station.

“Today was probably the proudest that I have been because we had every reason to shut it down the way we played early and the guys just battled and found a way to win,” said head coach Chris Klimas.

The Hillcats trailed 5-2 heading to the seventh inning, when Rogers State started its comeback. After a Grant Farris walk and a Brandon Bradshaw single, Nick Follett brought the first run around with a first pitch single down the left field line that scored Farris and moved Bradshaw to third.

Bradshaw would then score on a ground out by Griffin Keller. After a Brendan Griffith walk, Dylan Russell tied the game with a single through the right side to score Follett.

Brock Knoten came in and pitched scoreless innings in the ninth and tenth, sending the game to its second extra inning. In the 10th inning, the Hilltoppers had a runner on second with one out and Knoten threw a strikeout and Christopher Ford threw out the runner to get the Hillcats out of a potential jam.

Zack Mann then led off the 11th inning with his third hit of the game, singling down the right-field line. After Mann moved to second on a sacrifice bunt by Farris, he took third on a wild pitch.

Following an intentional walked for Bradshaw, Follett put the Hillcats ahead for good with a sacrifice fly to right field, allowing Mann to score from third.

Knoten came back into the game in the bottom of the 11th inning, recording a ground out, strike out and  fly out in order to secure the victory.

Rogers State started the scoring in the top of the first with a sacrifice fly from Farris to score ChristianMerriwether.

Farris finished the game with two hits and a walk, driving in two runs and scoring another.

St. Edward’s would come back with two unearned runs in the bottom of the third inning and then added another unearned run in the fourth inning to take a 3-1 lead.

The Hillcats finished the game with three errors.

Farris would cut the deficit to one in the fifth inning by hitting an RBI double down the left-field line to score Zack Mann all the way from first. Mann had two runs to go along with his three hits.

However, the Hilltoppers would extend the lead back to two runs by taking advantage of a slow return to the pitcher as starter Corey Murphy’s back was facing third base and St. Edward’s stole home.

St. Edward’s would add one more run in the bottom of the sixth inning to go up by three.

Murphy picked up a no decision, going 5.2 innings with just two of the five runs allowed being earned runs. Murphy allowed seven hits and had one walk and one strikeout.

Follett and Russell joined Farris and Mann with multi-hit games, as both had two hits. Follett had two RBIs and a run, while Russell had the one RBI.

All nine Hillcats had at least one hit in the game and six of them recorded a walk, with eight players reaching safely at least twice in the game.

The Hillcats will face the winner of Arkansas-Fort Smith and St. Edward’s who play in the elimination bracket final Friday evening. First pitch is set for 12:00 p.m., with Rogers State needing to win just one game, while their opponent will have two games to claim the championship.

Be sure to check Rogers State Athletics social media later this evening for updates on Saturday’s opponent.