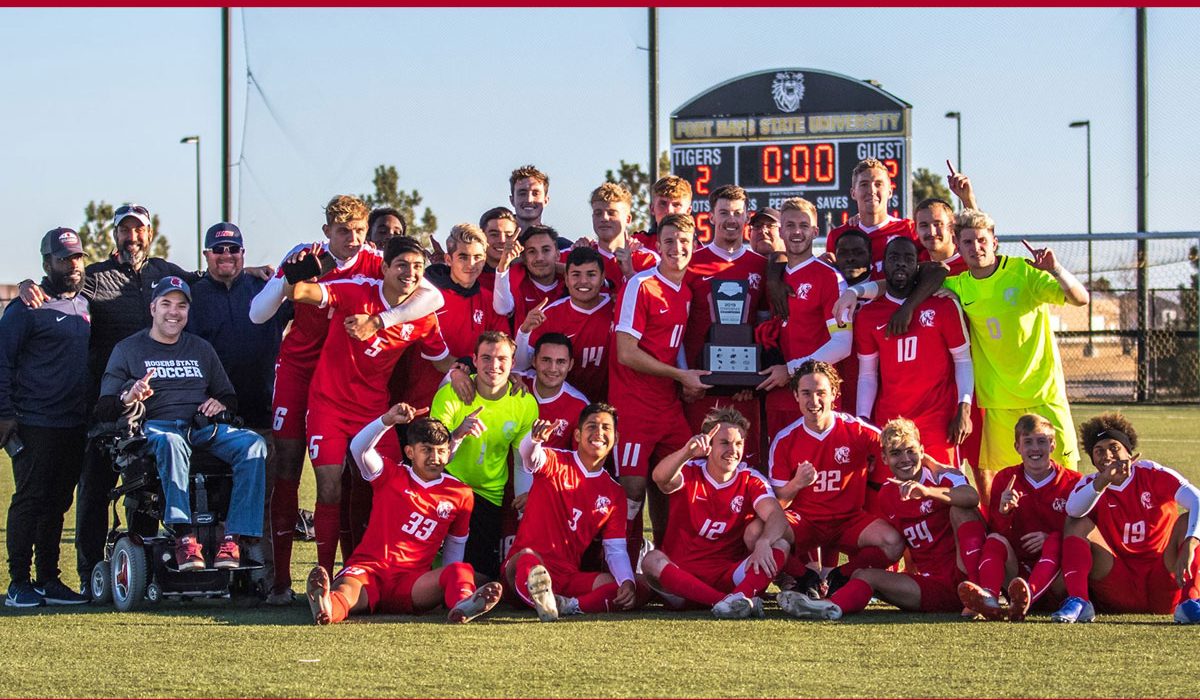 With the Hillcats (13-5-2) leading 4-3 heading to the final round of penalties, goalkeeper Austin Wormell dove to his right to stop the penalty kick attempt from Ross Boyd, clinching the championship for the Hillcats and the first-ever conference title in the program’s 13-year history.

Wormell was subbed into the game after the competition of double overtime and saw Fort Hays State’s (13-5-2) Arsenio Chamorro miss the opening penalty wide left.

Noah Robson then stepped up and gave the Hillcats the lead with RSU’s opening penalty kick. Jordan Watson and Callum Hubblethen followed up with penalty kick goals, after successful attempts from Fort Hays State’s Mauricio Etcheverry and Moritz Walther.

The Tigers tied it up at 3-3 in the first kick of the fourth round on a goal from Jurgen Ramirez, but Jaxon Pitt stepped up and scored the fourth straight penalty for RSU off of the bottom of the crossbar and in, setting up Wormell to make the winning save.

Rogers State fell behind early in the game, as the hosts were awarded a penalty kick in the 10th minute on a foul by goalkeeper Dillon Dean. Walther stepped up and gave Fort Hays the lead with the opening goal.

Rogers State would respond 10 minutes later, as Chris Sowder knocked in his first goal of the postseason to tie the game at 1. Hubble started the play with a pass to Pitt on the right wing and then Pitt delivered a cross in to the backside of the goal, where Sowder beat his marker and was able to knock the ball just inside the left post.

The goal was Sowder’s second of the season and 15th of his career.

The game would head into the halftime break tied at 1-1 with Fort Hays State leading in shots 6-4. Both goalkeepers had one save in the first 45 minutes.

In the second half, Noah Robson would fire the Hillcats into the lead in the 56th minute. Jordan Watson found Robson with a pass across the midfield to the left side of goal. Robson settled on the ball and fired a left-footed strike with the outside of his foot, bending the shot into the upper right 90 from 25 yards out to give the Hillcats the lead.

Robson’s first goal of the postseason was also his sixth goal of the season and 10th of his career.

However, the lead would be short-lived, as Etcheverry scored for Fort Hays less than five minutes later on an unassisted effort.

Rogers State would have the only other shot on goal in the game later in the second half, but the game would remain tied and head to extra time.

In the two overtimes, Fort Hays would have four shots, but none on goal, while RSU had one shot wide and one corner kick, but neither team could find a winner.

The Tigers were then reduced to 10 men in the 109th minute as Sergio Villalba was shown a red card for a second bookable offense after he had a yellow in the 11th minute of the game.

The Rogers State Men’s Soccer team will now await the NCAA Selection Show to find out if they have qualified for the 2019 NCAA Division II Men’s Soccer National Championship Tournament. The MIAA/GAC Conference Tournament does not have an automatic qualifying bid for this year’s national tournament, so the Hillcats must receive an at-large bid. The selection show will be Monday night at 5:30 p.m. CT on NCAA.com.