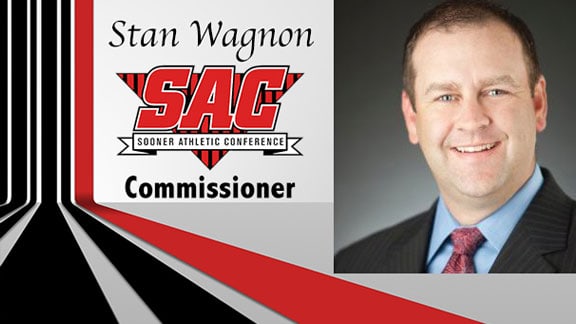 OKLAHOMA CITY – One of the most respected college athletic administrators in the nation has been chosen as the new commissioner of the Sooner Athletic Conference. Stan Wagnon, 42, will undertake Commissioner duties beginning July 1, 2016. He replaces John Hudson who served as the NAIA league’s only commissioner since its inception in 1978.

Wagnon’s hire was praised throughout college athletics circles as yet another step in the continuing strength and stability of the Sooner Athletic Conference, a 10-team league that boasts an NAIA record 86 National Championships.

“The Sooner Athletic Conference members are eagerly looking forward to having Stan Wagnon serve as our new conference commissioner,” said Dr. Chip Pollard, Chair of the Council of Presidents for the Sooner Athletic Conference.  “He brings great experience, competency, and character to the role, and we believe that he will be a wonderful leader for our member institutions, our athletic programs, and our student-athletes.”
Wagnon has been at the forefront of change in collegiate athletics over the last two decades and most recently worked as the Commissioner of the Lone Star Conference, an NCAA Division II league based in Richardson, Texas.

In his 11 years with the LSC, Wagnon brokered lucrative sponsorship deals with a number of nationally-known companies such as ConocoPhillips, Firestone, Fox Sports and Comcast Sport Net and Cigna. Those partnerships led to expanding the media exposure of the league in Top 200 TV markets and generating an additional $265K in cash and trade despite challenging marketing conditions.

Wagnon’s most noteworthy accomplishment was the creation of the Lone Star Conference Football Festival, held annually at Arlington’s  AT&T Stadium, home of the NFL’s Dallas Cowboys. The event broke attendance records, generated unprecedented exposure and added an additional $436K into the conference coffers.

Throughout his career, Wagnon has emerged as a national leader in intercollegiate athletics. He has served as Chair of the NCAA Division II Nominating Committee and the NCAA Men’s Basketball Regional Advisory Committee. He also served on committees for the Conference Commissioner’s Association (CCA) and College Sports Information Directors of Association (CoSIDA).

“It’s a tremendous honor to be selected as Commissioner of this tradition-rich conference, and I can’t wait to get started,” Wagnon said. “I’m deeply grateful to the SAC presidents and interview committee for this opportunity as I think it’s a great fit for me and my family. I look forward to working with the member schools as we strive to build upon Commissioner Hudson’s many contributions and position the SAC for unprecedented success in the years ahead.”

A native of Edmond, Okla., Wagnon earned his bachelor’s degree from UCO in journalism and public relations in 1996 and his master’s degree from Midwestern State in sports administration in 2015.

Wagnon’s father John “Skip” Wagnon worked at the University of Central Oklahoma for 30 years, including 17 as the school’s athletic director. Wagnon’s father is a member of both the UCO Athletic Hall of Fame and the LSC Hall of Honor.

Wagnon has been married to his wife, Jill, for 10 years. The couple live in Frisco, Texas with their three young children, Abby 7, Macy 6, and Knox 8 months.