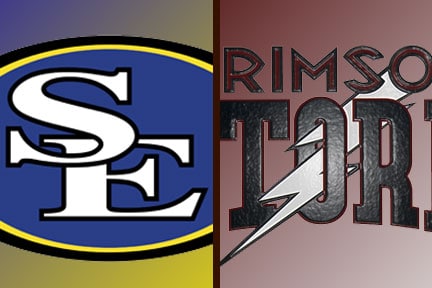 BETHANY, Okla. – Southeastern was unable to catch any breaks on Tuesday night as the Savage Storm dropped game two of the two-match season series with Southern Nazarene by a score of 3-0 in Bethany, Okla.

The loss drops SE to 2-13 overall on the year and 1-5 in Great American Conference play, while the Crimson Storm moves to 7-9 overall and 5-1 in league play.

Despite the 3-0 score, the Storm did continue to look as though it was building on the momentum of strong showings against the league’s top two teams over the weekend.

SE was tied or held the lead late in each of the first two sets, and nearly rallied from a 21-11 deficit in the third.

The momentum was aided by a near triple-double from setter Madelynne Cera who finished just one kill shy of the school’s first such accomplishment.  She tallied nine kills in the match and added 19 assists along with 13 digs.

Megan Kunkel also added a double-double in the effort, picking up a team-leading 10 kills with 14 digs.

Emily Gentle and Ariel Sanders each added six kills in the contest.

At the net, Natasha Smith picked up a pair of solo blocks, while Cera and Sanders each added one.

Southeastern jumped out to an early lead in the second set and padded it to as much as 12-5 in the early going.  SNU would use an 11-2 run however to erase the advantage and mount a 19-17 lead.  SE would seize the lead back at 24-22, but four-straight points from the Crimson Storm would hand SE a 26-24 loss.

Southeastern will be back on the court for the Wasburn Regional Crossover Oct. 5-6, opening the event at 9:30 a.m. on Friday with Emporia State.