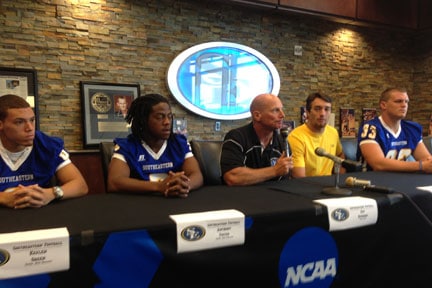 Southeastern football has opened camp for the 2013 season and local media came to Bloomer Sullivan Arena to learn about the team’s progress.

Head coach Ray Richards talked about the enthusiasm in the program through the first week of practices.

“We’re off to a good start,” Richards said.  “We’re relatively healthy at this point.

“We have a lot that’s been taught and we’re excited about the upcoming year.”

Logan Russell, a senior linebacker, said that part of his assignment is to make sure the younger players know the season is going to go well.

“The responsibility factor for a senior is a big role,” Russell said.

“I want them to feel comfortable with me being there and being vocal with them.  I want them to be able to put their trust in me.  That’s kind of the point of being a senior and being a leader in a team organization.”

Senior defensive end Coby Ragsdale spoke of the team and its unwillingness to quit through difficult times.

“We have faced adversity before,” Ragsdale said.  “I’ve seen many of these guys rise up after they have been beaten down constantly and taken so many hits.

“I put my full faith and trust in them and there’s no doubt in my mind that we’re going to come out from the first play and set the tone for the rest of the season.