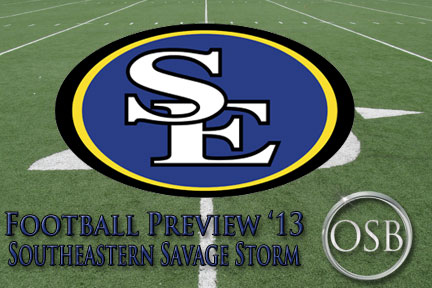 The Southeastern Savage Storm are picked to finish sixth in the Great American Conference.  That’s right in the middle of the pack.

SOSU has hovered at or below the middle for some time now and the team may be ready to make the next step.

If desire has anything to do with it, Southeastern coach Ray Richards said that his players have what it takes.

“I think these guys are all hungry,” Richards said.  “We’ve been through some good and bad times together.  But their character is big.

“One of the things you can find out about a person is how they respond when things aren’t going well.  And these guys have always responded well and stepped up and done the right thing.

“It says a lot about them.”

The Storm finished 2012 at 4-6, improving on just two wins in 2011.  But the team will be featuring a new quarterback and more fresh faces that did not see as much field time on last year’s squad.

Still, Richards has high expectations with this roster.

“I’m excited about our offense.

“We have some exciting receivers and we’re about as talented at wide receiver as we’ve been around here in many, many years.”

The team returns the two top receivers from 2012 in junior Anthony Gale and senior Keelen Green, who combined for 47 receptions and 693 yards.  Junior Anthony Foster saw action in only four games last season, but is expected to play a big role this year.

Nick Sioson will take over the quarterback spot.  The sophomore started one game his freshman year, but is more of a drop-back passer than his predecessor and Southeastern will be looking to pass more in 2013.

“Nick is a great competitor and throws the ball well.  He’s stepped up and is definitely our No. 1 quarterback right now.”

The ground game will also factor in.  Ladarius Abrams steps into his sophomore year as a featured back who gained more than 70 yards per game as a freshman.

Juniors Asanti McCrae and Lurell Johnson come to Southeastern through the junior college route and should also see time.

“We have some nice running backs.  I think we could be a real force in this conference offensively.”

One of the big additions on defense for the Storm comes in the form of someone who last played at Paul Laird Field 15 years ago.

Defensive coordinator Bo Atterberry returns to his alma mater for his second stint in the position.

“Having Bo back, from my standpoint, is just tremendous,” Richards said.  “He’s been a head coach (Texas A&M-Kingsville, 2007-2012) and I know that I can bounce things off of him and get some good insight.”

There are many returnees for Atterberry to work with on defense.

“Most of the guys starting for us this year have played quite a bit.  There’s really no substitute for that experience,” Richards said.

Ragsdale is also appreciative of the addition of Atterberry to the staff.

“Coach Atterberry came in and earned our respect right off the bat,” Ragsdale said.  “And then he showed us that same amount of respect. (As seniors) we’re going to go out now and try to help the younger players, so they’re prepared if the opportunity comes up to them.”

Fellow seniors Logan Russell and Eric Walker should also be leading the way as linebacker and cornerback, respectively.

The GAC is entering its third full season and all 11 teams that currently make up the league will each face the other 10.  Richards likes the conference slate.

“One thing I like about having 10 conference games is that every game is crucial,” Richards said.  “I would anticipate that whoever does win the conference championship will not go undefeated in doing it.  There will probably be some bumps in the road.

“I like our schedule and I don’t really mind playing 11 games straight.  It’s just a matter of staying healthy.  That’s the biggest factor.”

If the Storm can keep its players on the field and not on the sidelines, the desire to go further with this team is much more likely to happen.

And the hunger to succeed more likely to be satisfied.