Sayama turns the lights on in the new Event Center 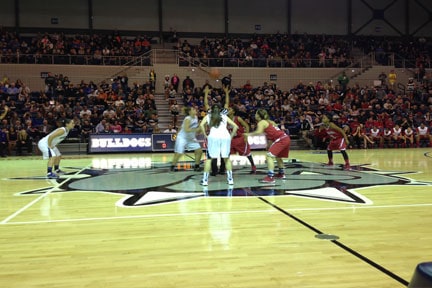 The spotlights shone on the new court in the Pioneer Cellular Event Center at SWOSU, revealing the three-point barrage put on by Sarina Sayama.

Southwestern defeated Northwestern, 87-68, and won the first collegiate event held in the new facility in Weatherford.

Sayama recorded the first three-pointer of the night, giving her team a five-point lead at 9-4.  She then went on to hit seven more in the game.  Her eight makes from long range were one shy of the school record.

The win was the first in the PCEC and brings the Lady Dawgs’ win streak to four.  Southwestern is now 7-3 in the Great American Conference.

Sayama, the reigning GAC Player of the Week, had a game high 26 points, shooting 8 of 13 from behind the arc (61.5 percent) and had five rebounds.

“I love this team and I just wanted to give everyone a good show,” Sayama said.  “But I know I wouldn’t be able to do it without the rest of the team.”

The Lady Dawgs continued their run in the first half and were up by 12 midway through the period and it would be the advantage they took into the break, 41-29.

SWOSU opened it up in the second half.  A three by Michelle Fisher was followed by three-pointers from Sayama on four of the next five trips down the court and the Lady Dawgs expanded the lead to 55-35.

Fisher had 21 points and six boards on the night.

There was no quit in the Rangers, though, and a NWOSU rally, capped by Emily Eaton’s three, brought them to within 10 at 62-52.

She hit from long range on the next three SWOSU possessions, pushing the lead back up to 71-54 and putting the game out of hand for the final five minutes.

Jonae Isaac led the way for Northwestern (4-12, 4-6 GAC) with 18 points, and just missed a double-double with nine rebounds.

Kamera got the double-double for the Rangers with 17 and 11.

The Rangers were regularly kept at bay because of the Southwestern defense.  SWOSU scored 24 points off turnovers, a focal point for coach Kelsi Musick.

“We talked this week in practice about capitalizing on their turnovers,” Musick said.  “They did a really good job of sticking to the game plan.  We knew if we could do that, we could spread the game out.”

“All we know is playing fast and a lot of people can’t handle that,” Sayama said.  “When we play fast, that’s when we’re at our best.”