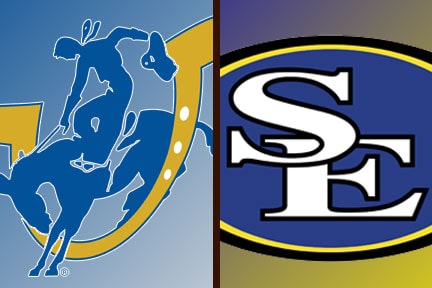 DURANT – The Southeastern defense held Southern Arkansas to minus-two yards rushing and tied a school record with eight sacks to help get the Savage Storm back in the win column with a 35-13 victory over the Muleriders on Saturday afternoon at Paul Laird Field.

The win lifts SE to 4-5 on the season overall and in Great American Conference play heading into its final road game of the year against Arkansas-Monticello on Nov. 7 in Monticello, Ark., at 3 p.m.

The loss drops SAU to 5-4 on the season overall and in league play.

The 35-13 final breaks a four-year trend of one-score games going back to the formation of the conference and gives SE a 3-2 edge in the series over that span.

The defense held Southern Arkansas to 318 yards on the day, but did it by switching up its specialties.  SE entered the game leading the conference in pass defense but was hit for 320 yards through the air, while on the other hand the Storm came in ranked 10th in rushing defense and held the Muleriders to minus-two yards on the ground.

Kent London turned in a team-best nine tackles and added an interception in the endzone and another pass breakup.

Sione Taufahema and Clay Waters each registered a pair of sacks, while Patrick Howard finished with 1.5.  Trent Hannah,Jaden Moore, and Josh Morrison each had at least a half-sack.  The eight sacks as a etam matches the eight sacks posted by the 1988 team in a win oevr Central Arkansas in the opening round of the NAIA playoffs.

The defense forced three turnovers on the afternoon, while offensively the Storm did not commit a turnover.

Offensively Southeastern racked up 461 yards of total offense with an even spread between rushing and passing after tallying 252 yards on the ground and 209 through the air.

Ronnie Green led the team with 115 yards on the ground on 12 carries, while Devlon Wortham put up three rushing touchdowns and finished with 71 yards.

Dru Smith added a rushing touchdown in the first quarter after getting the start under center, capping the team’s opening drive.

Ryan Polite would enter in the second quarter and finish the night 15-of-24 passing for 204 yards and a touchdown.

Kaymon Farmer hauled in seven receptions for 67 yards, while Franky Okafor was right behind in yardage at 62, doing it on three catches.

Bryce Steele added 54 yards receiving on two catches, including the longest completion of the game for the Storm of 49 yards.

Nick Sioson finished with a pair of catches, one of them going for the team’s lone passing TD.

SE took control of the game out of the gate when Jake Walters executed a perfect onside kick that was recovered by Rob Gardner.

The Storm would get a 39 yard run by Ronnie Green on the first play from scrimmage and Smith would cap the nine-play, 52-yard drive with a one yard TD plunge on fourth-and-goal to put SE up 7-0.

Neither team could mount a scoring drive over the remainder of the first quarter and much of the second.

Jackson would snag an interception in SAU territory with 6:56 to go in the half that would set of a Joel Carlos field goal try, but it was blocked, but SE benefitted as Elgin Moore would pick up the block at his own one-yardline where he was tackled.

SE would force a punt and take over with 4:15 to play in the half and take the ball 73 yards on six plays thanks to a 49 yard completion to Steele down to the one yardline before Wortham scored his first TD to put Southeastern up 14-0 which would be the halftime score.

The Storm would open the second half by taking its first possession 75 yards on 11 plays before Wortham added his second score, this one from three yards out, to take a 21-0 lead at the 11:17 mark of the third quarter.

SE would extend that lead later in the quarter after going 52 yards on nine plays before Polite hit Sioson for an eight-yard score to mount a 28-0 lead with 1:26 to play in the third.

SAU would answer at the 12:37 mark of the fourth quarter with a two-yard Tevin McDonald TD run, after forcing an SE punt would drive 78 yards on 11 plays before Barrett Renner hit Garrett Turnbull for a nine-yard TD, but a missed PAT would leave the Storm lead at 28-13.

Southeastern would respond after recovering SAU’s onside kick attempt and driving 39 yards on eight plays before Wortham cashed in his third touchdown of the day to put the Storm ahead 35-13.

SE finished off any hope for the Muleriders when Morrison sacked Renner for a loss of 13 yards, forcing a fumble which he recovered at the SAU 48 yardline.

The Storm would pick up a pair of first downs on the ensuing drive and run out the remaining 3:26 to finish off the 35-13 win.