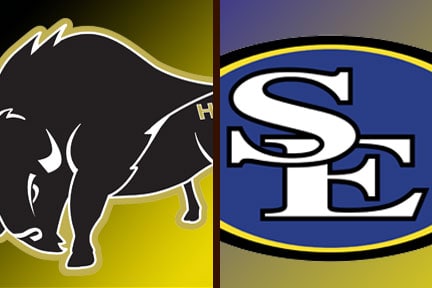 DURANT – Southeastern rallied from a slow start and a pair of 21-point deficits to tie the game with 12 seconds to play in regulation and battled four overtimes with Harding before falling 63-60 at Paul Laird Field on Saturday afternoon.

The loss drops the Savage Storm to 3-4 on the year and in Great American Conference play heading into an Oct. 24 road trip to face Arkansas Tech at 2 p.m. in Russellville, Ark.

To even advance to overtime SE had to rally from a 35-14 deficit with 1:03 to play in the third quarter after a pair of HU scores within a minute of one another left the Storm in a big hole.

A Ronnie Green touchdown would help Southeastern capitalize on a Bison miscue and close the gap to 35-21 with 12:47 to play.

Bobby Jackson would fall on a fumble on the first play of HU’s ensuing drive and eight plays later Ryan Polite would hit Franky Okafor for a touchdown and close the deficit to 35-28 with 10:43 to play.

The Storm defense held twice, with the second stop ending in a missed field goal by HU with 2:58 to play that hit the left upright.

SE would then drive the ball 80 yards over 15 plays in 2:46 with Polite connecting with Kaymon Farmer for a one yard score with 12 seconds to play to knot the game at 35-35 and send it to overtime.

The Bisons scored on their opening possession and SE looked to be in dire straits after a pair of big losses left them with fourth-and-28 from the 33 yardline when Polite lofted the ball into the south endzone and Okafor pulled it down to score and send the game to a second OT tied at 42-42.

The Storm needed a big third down conversion on a Polite to Okafor pass for 15 yards on their drive before Polite would finally hit Farmer from 12 yards out to put SE up 49-42, but HU answered on one play when Matt Tennison rumbled 25 yards on the first play to knot the game at 49-49 and head to a third overtime.

Going to a third overtime matched the most extra sessions SE had played in a game previously which was three in a road game against Ouachita Baptist in 2003.

On the first possession of the third OT, HU used seven plays before Tennison scored from two yards out and Park Parish added the two-point conversion to make the score 57-49.

SE then took the ball and got a Polite connection to Farmer on third and 11 that was just enough to convert a first down and one play laterAsanti McCrae scored form 15 yards out. Polite would hit Okafor for the two-point conversion to knot the score at 57-57 and send the game to a fourth OT, setting a school and GAC record for most overtime sessions.

The Storm drive was unable to pick up a first down and Joel Carloscame on to hit a 35 yard field goal, his longest of the season, and SE went up 60-57 needing to hold the Bisons to at least a field goal.

The Storm defense forced HU into a fourth and goal situation inside the one yard line, but was unable to hold on the final play of the game as Parish scored from a yard out to hand HU the 63-60 win.

Southeastern’s 60 points is the most in a game since a 63-0 win over Oklahoma Baptist in the 1922 season.

Polite matched the record for completions in a game with 37 and set a new school record in attempts with 68, finishing with 398 yards which is the fourth best mark in a single game in school history.

The 106 total plays the Storm ran on the day matches the school and GAC record for plays in a game, finishing with 465 yards of total offense, with 398 of it coming through the air.

Franky Okafor turned in a career day with 12 catches for 177 yards and a pair of touchdowns, while Kaymon Farmer added eight catches for 58 yards and three scores. Ty Miller hauled in six passes for 34 yards and in all Polite hit nine different receivers on the day.

While the rushing game was slow, Green finished with 30 yards on 20 carries, but did post a pair of scores, while McCrae had five carries for 18 yards and a TD.

Josh Morrison posted a team-high 10 tackles on the day, with Bobby Jackson and DaMarius Lavender right behind with nine each. In all, nine defensive players put up five or more tackles in the game.

The Storm was able to force three turnovers despite allowing 586 yards rushing on 69 carries and a total of 650 yards of offense by the Bisons.

Chip Jones and Traivonne Brown each forced a fumble, while Jackson, Brown and Freddie Ngwu each had a recovery.

SE got off to a rough start with Harding scoring on its first possession after the Storm turned the ball over on downs to open the game, and the visitors would take a 14-0 lead into the second quarter.

HU took its first drive of the second quarter 90 yards in six plays, including a 41 yard Dwayne Carter touchdown run to open up a 21-0 lead with 10:29 to go in the half.

SE looked like it might go to the break scoreless, but took advantage of a third and a fourth down conversion thanks to a pair of Bison penalties and in a bit of foreshadowing, Polite would cap the 12 play, 87 yard drive with a four yard pass to Farmer to make the halftime score 21-7.

The Storm looked to mount a rally after turnover HU over on downs to open the second half, with Green capping a 13 play, 76 yard drive with a two yard rushing touchdown to close the deficit to 21-14 with 5:05 to go in the third.

However, the Bisons would march down the field on their next drive to take a 28-14 lead and after SE mishandled the ensuing kickoff would add another score just 51 seconds later to open up a 35-14 lead with 1:03 to go in the third quarter.

SE answered with the aforementioned 21 point fourth quarter to send the game to overtime.