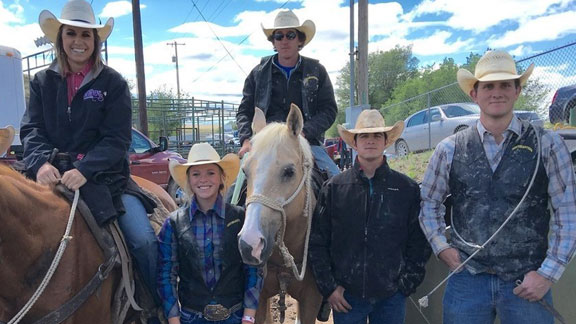 The Southeastern Rodeo Team opened the 2016-2017 in Colby, Kan., last week. OklahomaSports.Net gets you ready for the Southeastern Stampede on Oct. 6-8 with a review of the SE trip to Colby.

COLBY, Kan. – Southeastern rodeo opened its season with the longest road trip of the year but made it pay off with the women’s team posting a second place finish and the men turning in a fourth place finish at the Colby CC Rodeo in Colby, Kan.

The women’s team missed the team title by just five points, while a bit of bad luck in the short go on the men’s side left them in fourth.

The Savage Storm women dominated the goat tying event, returning five of the 10 final round participants.

That group was led by Kylee Bennett who won the first round with a time of 7.3 seconds and answered by matching the lowest time of the weekend in the short go with a 6.3 to secure the event championship.

Shelby Whiting posted matching 7.5 runs in the long and short go and was rewarded with a third-place overall finish for her consistency.

ShiAnn Henderson turned in a 7.6 on her first run and finished the weekend with a 7.7 in the short go to wrap up a fifth place finish in the average.

Lainey Cooper opened with an 8.2 and advanced to the short go in the 10th position.  She followed up with an 8.8 in the finals and was able to finish seventh in the average.

Jayci Braudrick clocked a 7.5 run in her first outing to split second and third with Whiting, but a rough dismount in the finals would lead to a 10.7 run and a 10th place finish.

Britten Wallace turned in a ninth place overall finish in the breakaway, opening the event with a 2.7 run to split third and fourth before missing in the short go to slip to ninth.

Bennett was one place shy of making the short go with a time of 3.4.

On the men’s side, Kolton White turned in the best event finish of the weekend after he turned in scores of 44 and 51 in the saddle bronc competition which ultimately placed him second in the average.

The Storm continued its strong rough stock showing in the bull riding where Wyatt Rogers split second and third in the long go with an 80, and despite getting bucked in the short go was able to finish third in the average.

Cole Pacheco registered a 65 on his first ride in the event, but was forced to take a no score on his second horse after the judge docked him for a mark out which means that his feet were not over the point of the horses shoulders with his toes out when the horse cleared the chute.  Despite the penalty he was able to finish eighth for the weekend.

In the steer wrestling, Ty Cochrane turned in a 4.6 run in the long go to finish second in the round, but had to take a 10 second penalty for breaking the barrier in the short go to finish with a 15.1 and finish seventh in the average.

Denver Berry was a 4.1 on his first steer in the event, but was also his with a penalty for breaking the barrier to post a 16.5 and finish eighth in the average.

Cochrane also turned in a sixth place finish in the tie down roping after finishing third in the first round with a 10.0 run.  He turned in a 12.3 in the short go which was good for sixth in the round and landed him sixth in the average.

Southeastern will be back in action Oct. 6-8 at the Southeastern Stampede at the Durant Fairgrounds.