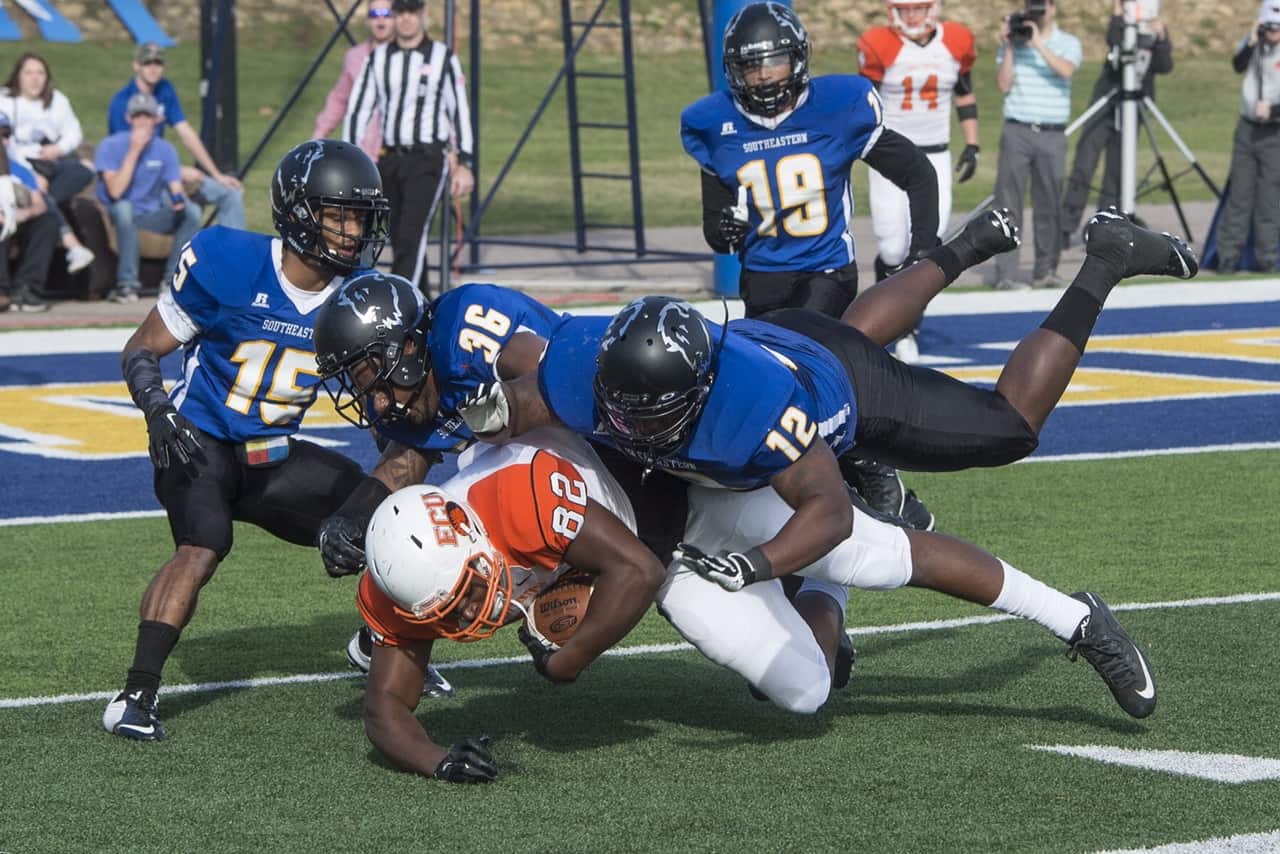 DURANT – For the second-straight year Southeastern closed out its regular season with a win in the Great American Classic, downing East Central 37-27 on Saturday afternoon at Paul Laird Field.

The win gives the Savage Storm a 6-5 record overall and in Great American Conference play, marking its second-straight winning season, doing so for the first time since the 2008 and 2009 seasons.

Southeastern now takes control of the all-time series 47-46-6 heading into the 100th meeting next season.

The win also closes out the year on a three-game winning streak, during which SE has outscored its opponents 109-40.

Kent London was named the Landmark Bank Player of the Game for Southeastern after turning in eight tackles and a pair of interceptions, both in the red zone.  It marked the third-straight game London has had a pick, and the second-straight in which he had two.  Three of his five interceptions over the last three weeks have come in the end zone.

Offensively the SE running game piled up 234 yards, led by Devlon Wortham who finished with 95 yards on 17 carries with a pair of scores, while Ronnie Green was at 77 yards on 16 carries with a score of his own.

The offense was remarkably balanced as Ryan Polite finished his career at SE 2-0 against the rivals to the north, throwing for 211 yards and a touchdown on a 20-of-30 effort in his final game.  The senior will finish his career in fifth on the all-time passing yardage list with 5,467 yards, with his 2015 campaign going down as the fourth-best single season effort in school history.

His top target was Franky Okafor who hauled in five catches for 83 yards and a score.  He too found his way into the record book in his final season, finishing with 841 yards which is the eighth best single season outing.

Despite giving up 409 yards passing, the Storm clamped down on the run game, allowing just 68 yards on the ground.

SE finished with 445 total yards, while ECU outgained the Storm with 477.

In addition to forcing a pair of turnovers Southeastern did not commit a turnover of its own, marking the third-straight game they have not committed a turnover.

Kevin Jones led SE in tackles on defense with nine, while London was next up with eight, followed by Jacoby Sanders and B9obby Jackson with seven each.

Trent Hannah recorded the team’s only sack, going for an eight yard loss as one of his six tackles on the day.

SE played a true three-tool game with the special teams playing a big part, particularly on the foot of Joel Carlos who was 3-for-3 on field goals, hitting from 35, 25 and a new career best 43 yards.

In addition he averaged 43.2 yards per punt on four punts, landing one inside the 20 and turning in a long kick od 50 yards.

Southeastern got off to a slow start as ECU marched 86 yards on 12 plays to score on their first drive and would cap a 10 play drive early in the second quarter to open up a 14-0 lead.

The Storm finally answered on the ensuing drive and went 65 yards in eight plays with Green finishing it off with a 33 yard touchdown run to cut the deficit in half at 14-7.

After forcing a three-and-out SE would move the ball on its next drive thanks in part to a pair of personal foul penalties by ECU, the first a 15 yard facemask and the second a roughing the passer that moved the ball half the distance to the goal line at the seven where Wortham would finish it off with a seven yard TD run to knot the game at 14-14 with 6:00 to go in the half.

The teams would trade fruitless drive, with the Tigers pinning SE on its own one yardline with 1:42 to play in the half.

Polite would open up with a 38 yard pass to Okafor on the first play of the drive and SE would march the ball to the ECU 18 yardline where it would call timeout with four seconds remaining, allowing Carlos to nail a 35 yard field goal as time expired on the half to take a 17-14 lead into the locker room at halftime.

The Storm got the ball to start the second half and used a 42 yard Polite to Farmer connection to get down to the Tiger 15 yard line with Wortham punching it in from four yards out to cap the drive and open up a 24-14 lead.

ECU would take advantage of a stalled SE drive, and despite a Nick Sioson punt pinning them on the five yardline, they would march 95 yards on nine plays before Jamal Hall would score from a yard out to cut the Storm edge to 24-21 which would be the score heading into the final quarter.

Carlos would cap an SE drive 11 seconds into the fourth with a 25 yard field goal to stretch the lead to 27-21.

After forcing a three-and-out Southeastern would move the ball to the Tiger 26 where Carlos would connect from 43 yards out with 11:18 to play to open up a 30-21 advantage.

London would turn in his first pick of the day on the ensuing drive, snagging it in the endzone, and SE would take advantage with Polite finding Okafor for 32 yard and a TD with 5:33 to play to open up a 37-21 lead.

London would end the next Tiger possession as well with an interception on the SE two yardline which he returned 17 yards.

The Storm would run 1:44 off the clock on the next drive before punting it back to ECU who would take advantage of a pair of SE 15-yard penalties to move down the field before Rocky Moore hit David Moore for a 15 yard TD, but the PAT would ricochet off the left upright, leaving the Storm up 37-27.

That would hold to be the final score as SE fielded the onside kick ans would run out the remaining 1:16 on the clock.