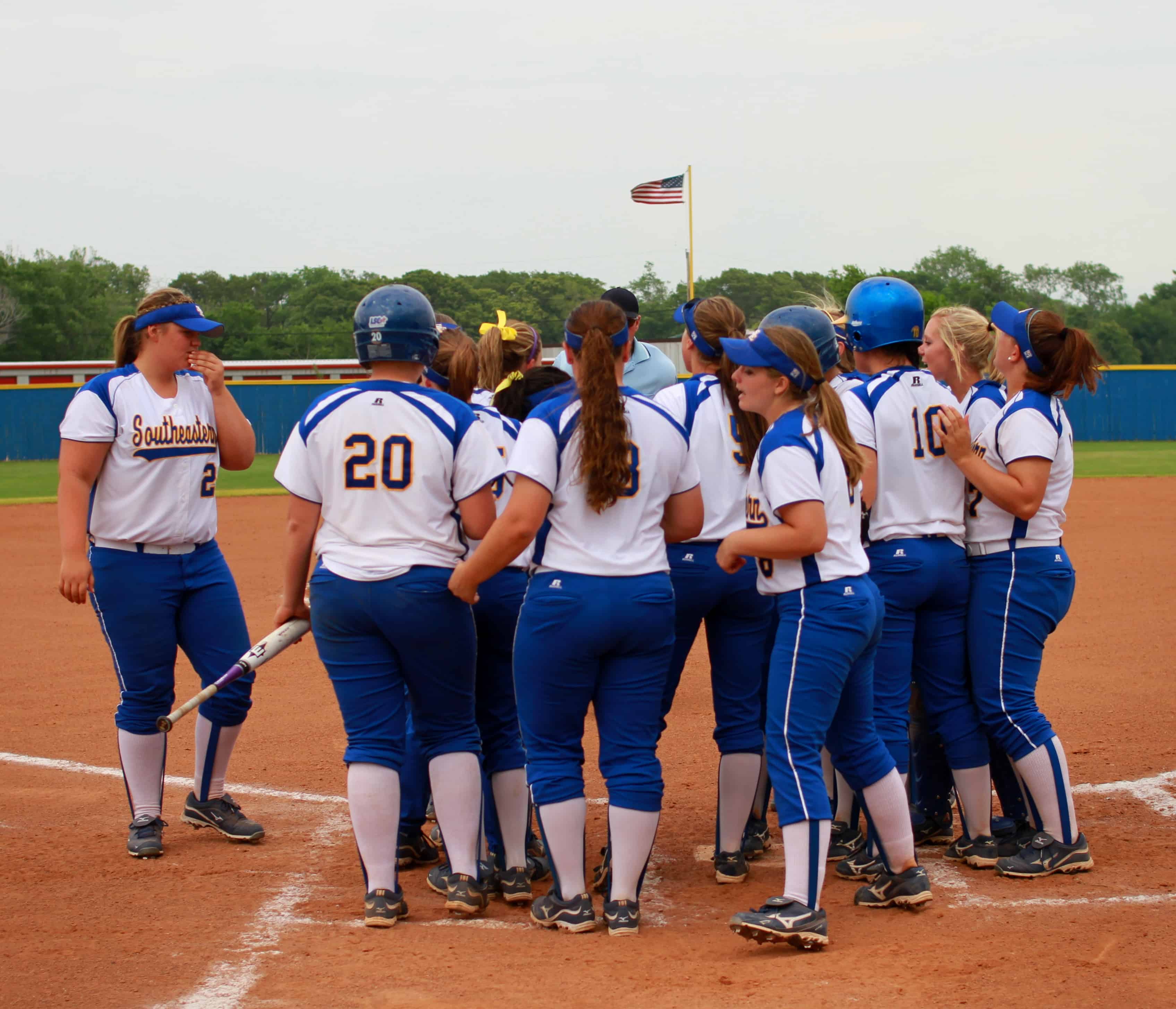 Durant – The Southeastern Savage Storm (31-13) split a doubleheader in Durant with the University of Arkansas-Monticello on Saturday, battling under windy conditions and the constant threat of storm showers. SE led off the first game of the series with an 3-2 win, followed by a close 4-3 loss in the second.

Senior Audra Rhudy tossed the complete game in the opener, with two runs, four hits and eight strikeouts, for her 20th win of the season.

The first game didn’t see any scoring until the third inning. After a single by Whitney Hamilton, a solid hit to right-center field by Audra Rhudy sent pinch runner Lyndi Davidson from first to home, leading 1-0 in the third.

The Savage Storm then heard no response until the sixth inning when Kayla Jackson, pitcher for the Cotton Blossoms, marked up a two-run homer by hitting the left field fence.

In the bottom of the sixth, Katie Campbell hit a double which sent on-base runner Paige Priest home.  The score was now tied and, one batter later, Vrska stepped up to the plate to hit a single, helping Campbell home for the 3-2 win.

Before the second game, Rhudy said, “We either have to win this one (series) or we have to count on Southwestern losing,”

In response, Rhudy’s friend, Mark O’Dea, chimed in “Yeah, but if ya’ll win one more, ya’ll are done. You’re the champs!”

Campbell smashed yet another one past the fence in the third inning, a two-run homer, setting the Storm up with a 3-1 lead. But SE saw the Blossoms tie it back up in the sixth with an equalizing two-run homer by Taylor Russell.

The chance of an early entry in a national tournament was frustrated in the top of seventh inning with yet another homer by the Blossoms’ Beth Johnson, to which SE would have no answer, finalizing the score at 4-3.

“I felt like the first game, they probably should have won and the second game, we should have won,” Faubion said. “We were fortunate in the first game to come up with the big hits. And then (in the second game) they just got the big hits – the two homeruns off us. But they’re a really good ball club. They’d won 17 in a row and we’d won 16 in a row.”

If the Storm had won both games, SE would have been assured a spot in not only the GAC tournament, but also in the national tournament. The Savage Storm still have tomorrow to seal the deal with more series games at 11 a.m. and 1 p.m.

Faubion commented on the season saying, “We’re playing well and we got a chance to make the national playoffs, but we gotta keep winnin’ We have to win both games tomorrow.”

Senior day is this Sunday, recognizing the girls who will be leaving, or in some cases sticking around to help the SE team a little bit longer. Lindsey Lacy and Courtne St. Clair will be coming back as G.A.’s for the next two years starting in the spring. Faubion said he was excited and pleased about that.

“We’ve got eight really good seniors,” Faubion said. “For instance, Lindsey Lacy is one of our best health and physical education students – she’ll be doing her student teaching next year. Lyndi Johnson has been one of our better homerun hitters for the past two years. Sam – she’s an excellent third baseman. Katie Campbell is an outstanding shortstop.”

And Faubion took the time to focus on Rhudy.

“Audra’s a great pitcher,” Faubion said.  “She should be first team all-conference. She’s gonna be helping at Grayson junior college – gonna be the assistant (coach) down there. That should tell you how well everybody thinks of her. You don’t get those kinda jobs if you’re not a good person. You can tell the kids that were raised right.”

Rhudy volunteers on spare weekends as the pitching coach for the Paris, Texas, little girls league called “Tuff Nuff,” and said she dedicates even more time during the summer to the seven and eight year-olds.

Maura O’Dea, mother of a Tuff Nuff little leaguer, said “She’s great with kids. They really look up to her. That’s why they came (to the UAM game) – They wanna be just like her.”

“I love doing it,” Rhudy said. “I never had anybody like that when I was younger. I wish I did. I had to go to places like McKinney, Dallas or Garland (from Ector, Tx) to get competitive instruction. Otherwise, there’s nobody that would take me seriously, even as a twelve year-old.”