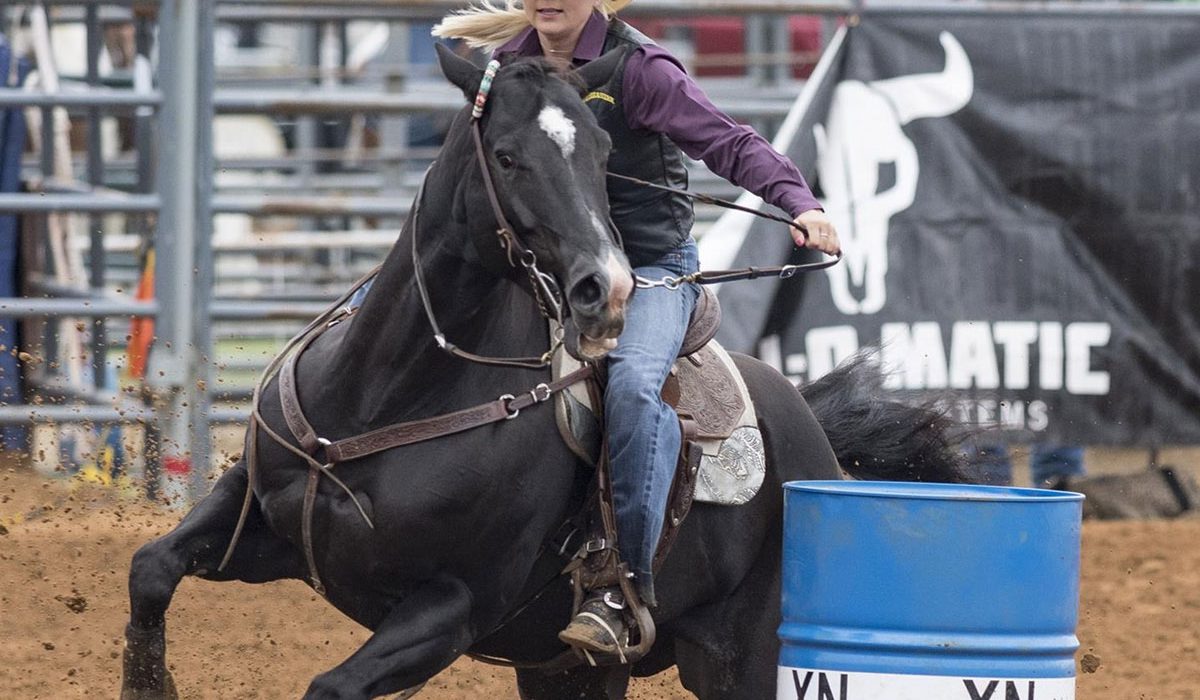 STILLWATER – Thursday night’s performance at the Oklahoma State University Rodeo was the only one not directly affected by weather conditions, however Southeastern’s men’s and women’s teams adapted to the conditions, with the women splitting first place with Oklahoma Panhandle State and the Savage Storm Men’s Team pulling out a 4th place finish.

The first night of competition opened up with great weather.

Friday morning slack competition started off with rain and challenging ground conditions, but Peyton Glenn was able to start the Storm off and stop the clock in the barrel racing with a 16.86 in her qualifying run. Glenn’s time held up for a second place finish in the first round of competition. She came back in the short go round and was able to clock a 16.87, which was good for second in the short round, while her combined mark of 33.73 earned her a first place finish at the OSU college rodeo.

Cierra Doyal stopped the clock with a 7.2 in her first run in the goat tying, which split 5th/6th place.  She came back with an 8.1 in the final which ended up placing 5th in the short go round.  Doyal was able to end the competition placing 5th in the aggregate with a combined time of 15.3.

On the men’s side Brian Scamardo was able to come out in the steer wrestling and post a 4.8 on his first run to place third in the long round of competition. He followed that with a 6.9 run in the final, which placed him a 5th place finish on Saturday night of competition. Scarmando was able to post an 11.7 in the aggregate and leave the weekend with a 3rd place finish.

Friday night’s performance brought more challenging weather conditions with Southeastern senior Cierra Chapman posting a 17.10 in the barrel racing, giving her a 5th/6th place finish in the first round of competition. She was able to come back Saturday night to the finals and improve her time to 17.06 giving her a 4th place finish in the short go round splitting 4th/5th in the aggregate.

Hayden Harris started Friday night slack in the bull riding by making the whistle for eight seconds and posting a score of 63, earning him seventh in the short go round.  Harris was able to improve his score in the short go round and post a score of 79.  His combined scores totaling 142 were good enough to earn a second place finish for the weekend.

Saturday morning slack started off with the women’s breakaway and Kenzie Castor posting a time of 3.0, which brought her back splitting 7th-9th position. Castor followed up in the finals with a time of 2.7 placing her third for the night and third in the aggregate.

Despite the rainfall during the team roping competition Saturday morning slack Dalton Titsworth and Kolton Whitewere able to post a time of clean run of 6.7, which gave them a 2nd place finish for the long go round.  They came back and had some bad luck going out with a no time in the finals.  With only two teams posting a time in the finals they were able to end the weekend in 3rd position for the weekend.

Southeastern’s men lead the region for the season through three rodeos, holding a 35 point edge over Northwestern Oklahoma State.

On the women’s side the Storm head into the final event of the fall in second, 82 points behind Oklahoma panhandle State.

For the women, Glenn leads the way in the barrel racing by 250 points, while teammate Cierra Chapman is in fourth. Lainey Cooper is in the hunt early in the goat tying competition as well, holding third place.