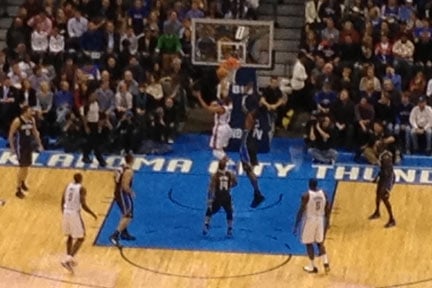 If you watched either or both of the preseason contests between the Thunder and the Mavs, you saw today’s results coming.

The team that took the court in the American Airlines Center is not the same one that took down the Miami Heat last summer to win its first championship in franchise history.  Miami defeated Dallas 104-95 and looked good doing it.

Meanwhile, Oklahoma City fields almost exactly the same team that rose to new heights for a young franchise, but still found itself in a position to “pay its dues” with a playoff exit one level before the NBA Finals.  Oklahoma City opened the season defeating the Orlando Magic 97-89 in front of a crowd thrilled to Thunder Up once again.

Dallas raised a well-deserved championship banner and then looked little like champions on their home court.

Oklahoma City had an off-season to think about what a championship might feel like and then came out looking ready to earn it.

The big difference between the two: chemistry.  OKC has it; Dallas doesn’t.  Not yet this season anyway.

On this Christmas day, Dallas was a team that did not shoot well enough, rebound well enough, defend well enough or pass well enough.  The LeBron James that looked couldn’t put together 48 minutes worth of game, or effort for that matter, at any point during the 2011 playoffs, was allowed to reestablish superhero status in one game.

While the 2,011th Noel saw the Thunder distribute the ball with ease to teammates who didn’t need a long preseason to get to know each other, shoot the ball at nearly a 50 percent clip, and defend like they were in midseason form.  And as for superheroes on the court, Dwight Howard was forced to stay in Clark Kent mode.

Still, it is just Game 1 of 66 (and yes, that sounds weird in and of itself), but the initial observation is this:

Oklahoma City looks like the front-runner to take on Miami or Chicago in the NBA Finals six months from now.