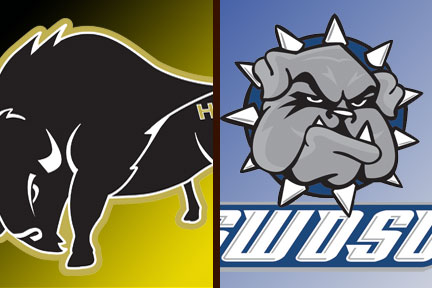 WEATHERFORD – After falling behind 10-0 against Harding on Senior Day, the SWOSU Football team showed their resilience to come back for a 21-13 victory over the Bisons, giving the Bulldogs a perfect 5-0 record at ASAP Energy Field this season as they finished unblemished at home for the first time since 2002.

SWOSU was stagnant offensively until late in the first half when they drove 54 yards in six plays, the final of which an untimed down with no time remaining on the clock following a pass interference call against Harding. On the untimed down, Bulldog quarterback Marc Evans was hurried before he found a crossing Derrick Styles, who made a one-handed catch for a three-yard touchdown. The extra point made it 10-7 Harding going to the half but left the Bulldogs with all the momentum.

Harding extended the lead back to 13-7 with a 10-play field goal drive, but the Bulldogs scored the final 14 points for the victory. Karltrell Henderson scored the go-ahead touchdown with 2:59 to play in the third quarter, capping off a 10-play, 64-yard drive with a four-yard plunge into the end zone that put the Dawgs up 14-13.

SWOSU was stopped on their opening drive of the fourth quarter, but Clinton Horn recovered a fumble on the Bisons first play of the ensuing possession to give SWOSU the ball back. The Bulldogs needed five plays to cash in with Evans finding Carlos Smith on a back shoulder throw in the endzone from 14 yards out that upped the lead to 21-13.

The Bulldogs defense held Harding’s rushing attack that had been averaging 395.4 yards per game – ranked second in NCAA Division II – to just 186 yards on 44 attempts and SWOSU became the first team since 2011 to outrush the Bisons in a game. Harding had just 243 yards of total offense, averaging 4.3 yards per play. The Bulldogs had two big takeaways in the game and they were led in tackling by Kapena Olsen, Clinton Horn and Collier Ward with six stops apiece. Tanner Thompson had two tackles for loss and the Bulldogs finished with five TFL as a team.

The majority of SWOSU’s offensive damage was done on the ground as the Dawgs had 190 net yards rushing and 159 yards through the air. Kenneth Martey had 106 yards rushing on 25 carries with Karltrell Henderson rushing for 64 yards and one touchdown with 16 carries. Marc Evans was 14-for-31 passing in relief of Brooks Robertson, throwing for 152 yards and two touchdowns, giving him 18 touchdown passes for the year, tying the third-most single season total at SWOSU in the NCAA era.

“The kids just played hard today and all the credit goes to those players,” SWOSU Head Coach Dan Cocannouer said during his postgame interview. “They never gave up and kept on playing. What happened out here is because our guys believe in themselves and believe in this program.”

With the victory, the Bulldogs improve to 6-3 on the year, clinching their second winning season in the past three years with two games to play. SWOSU will be on the road the next two weeks, starting with a trip to Russellville next Saturday to face Arkansas Tech, one of two teams that still sits ahead of the Bulldogs in the Great American Conference standings.