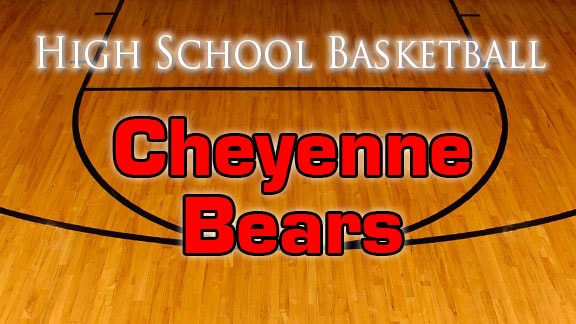 The latest OSSAA rankings have the Cheyenne girls at the top of Class A again.  And the Bears have given no one reason to think they should be anywhere else so far this season.

And the winning this season has not come as a surprise to head coach Brad Thrash.

“Well, you know, we have eight seniors,” Thrash said.  “We got everybody back from last year’s team so we had expected to make a run back to the state tournament and be ranked at the top somewhere.”

The strength of the Bears, who made it to the Class A state semifinals in 2014, lies in the team, not just individuals.

“We’ve been playing well. We’re really good defensively. Offensively, we kind of ebb and flow. Different girls, different nights. We’ve had four different girls lead us in scoring in different games throughout the year, so just never know with us.”

Thrash had an easy time pointing out some of the strengths of his players when breaking down the components of this team.

“Kate (Sandler) leads us in scoring most of the time. We run our offense through her, and then we get good movement.

“And then we have three really good guards off the bench. Our depth is pretty good. We can get really little at times, but our defense is pretty good. And we’ve got so many guards, we handle the ball really well.”

The Bears had a stretch of eight consecutive games in their schedule in which they faced ranked opponents.   They won seven.

Another highly ranked team comes to town on Tuesday night as No. 3 Thomas (7-0) travels to the extreme western portion of the state.

Thrash was able to size up the matchup between the two teams.

“They’re huge. They’re going to make us look really little. They look a lot like Washington. They’ve got strong girls inside and some guards that can really handle it and good three-point shooters. So we’re going to have to play really well to beat them.”

Thrash’s ‘little’ team has a big assignment in a game that could determine a lot about the upcoming playoff bracket.  But the experienced Bears have taken the simple approach to each game this year

“We just kind of play them one at a time and just try to get ready for the playoffs,” Thrash said. “We’d like to beat Thomas to try to solidify where we are with the playoff ranking because that’s the last one before they draw it up. It’s an important game for both of us because we’re probably one and two and they haven’t been beaten yet.”

Cheyenne/Reydon travels to Canute on Friday, Jan. 16, and will get the chance to defend its title in the Bi-County Tournament the next weekend in Elk City.