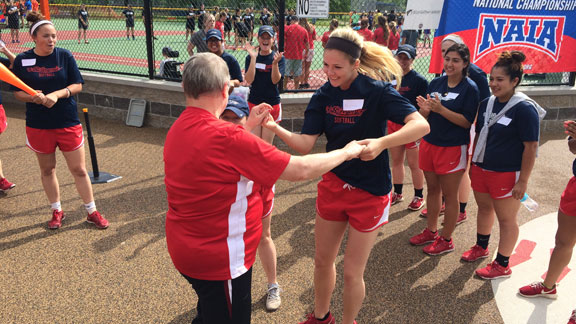 SIOUX CITY, Iowa – Members of the St. Gregory’s University softball team took a break Thursday from preparing for this week’s NAIA World Series by participating in a clinic for Special Olympics athletes. SGU players specifically worked with the Village Northwest Panthers program, a delegation of Special Olympics Iowa.
“As an athlete, sometimes you get caught up in playing the game,” said St. Gregory’s senior Maria Mercado Contreras. “Today’s event helped me realize that there’s more to it than just what happens on the field. We shouldn’t take anything for granted, and we should play for and support those with disabilities.”
The team took the group through a series of stations, giving instruction on hitting and fielding in addition to playing various games. The Cavs also signed autographs for Village Northwest athletes and did an interview with local news outlets KMEG 14 and FOX 44.
St. Gregory’s opens World Series play Friday at the Jensen Softball Complex in Sioux City, Iowa. The third-seeded Cavs take on No. 6 seed Southeastern (Fla.) at 7:30 p.m.