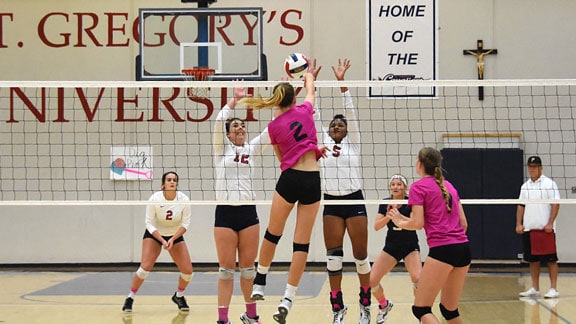 SHAWNEE – St. Gregory’s pushed its win streak to 11 with a nail-biting five-set triumph (26-24, 15-25, 25-20, 23-25, 15-13) over Mid-America Christian Friday night at Sumner Field House. The Cavaliers kept their hold on third place in the Sooner Athletic Conference standings, remaining one game back of second-place Wayland Baptist (Texas).

SGU (18-8, 9-2 SAC) was pushed to the brink for the second time this season by the Lady Evangels – both during the current win streak. Three weeks removed from the Cavs’ 3-2 win over MACU in Oklahoma City, the teams lined up for a nearly identical result Friday.

The deciding game, which featured 12 ties and three lead changes, mimicked the back-and-forth first four sets. Tied at 13 in the fifth, SGU got just enough separation with consecutive kills from Mackenzie Richardson and Gabby Ware to end it.

Cierra Mullins had one of her best matches of the season with a 15-kill, seven-block effort. Her rejection total was a career high. Sarah Ahrens also put up career numbers, finishing with 48 assists and four blocks. She has at least 30 helpers in nine of her last 10 contests.

Ashlyn Broussard notched her seventh straight double-double and 19th of the season. She had 16 kills and 28 digs. Ware wasn’t far behind her teammate with an 11-kill, 26-dig night. Kayley Davis tied for team-high honors with 28 digs.