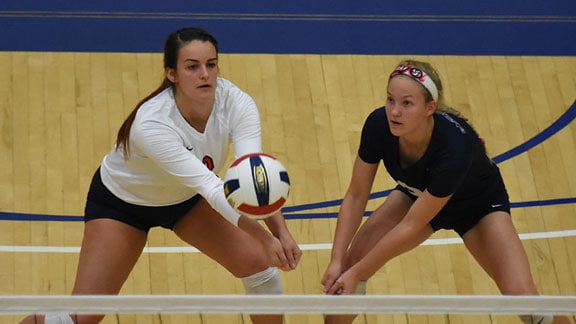 SHAWNEE – The streak continued Tuesday night for St. Gregory’s in a 3-0 (25-15, 25-19, 25-21) win over Langston at Sumner Field House. The upstart Cavaliers extended their program-best victory streak to eight matches and moved to 5-1 at home.

SGU (15-8) set the tone early against the Lady Lions, hitting .281 in cruising to a first-set victory. The Cavs never trailed in the frame.

Tied at seven in the second, the home team went on a 12-2 run – capped by an Ashlyn Broussard ace – to seize the momentum. Langston pulled to within 20-16 but could get no closer.

Up 22-20 in the third, the Cavs scored three of the set’s final four points to secure the win. Courtney Murphy’s kill from Sarah Ahrens ended it.

The Cavs return to action Friday night at Bacone. First serve is set for 7 p.m. in Muskogee.