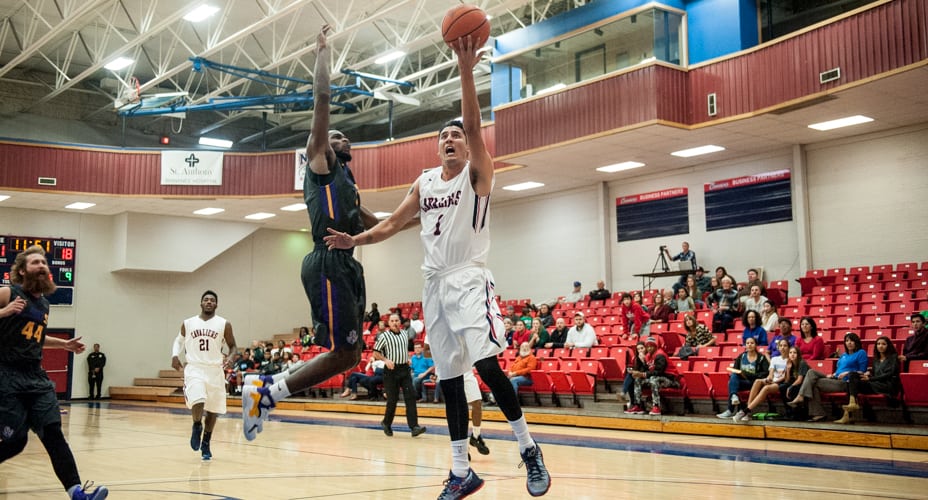 SHAWNEE – Phoenix Bills scored a game-high 28 points in his St. Gregory’s debut, and the Cavaliers upset No. 14 LSU-Shreveport, 98-94, Monday night at W.P. Wood Field House. SGU improved to 4-0 against the Pilots all time, claiming victories against ranked LSUS teams each time.

Bills, a transfer from Pratt Community College, scored 20 of his total in a hot-shooting second half for his team as a whole. The Cavs hit 17 of their 27 shots (63 percent) in the final 20 minutes to keep the visitors at bay. Bills made all five of his second-half attempts.

SGU senior Richard Shields was part of that late attack, tallying 22 of his 27 after intermission. Stephen Walter added 19 on a 7 of 14 night, and Tim Stromberg finished with 12 on 5 of 5 shooting.

The Cavs won despite being outrebounded 60-31 – a total that included 29 LSUS offensive boards. SGU was able to offset that by scoring 18 points off 19 Pilot turnovers and holding the visitors to only 39 percent shooting.

The home team trailed by as many as 12 early on but rallied to get to within 40-37 at intermission.

The second half was a back-and-forth affair. Down 49-48 with 15 minutes to play, Shields hit back-to-back buckets to put the Cavs up by three – a lead they would never relinquish. SGU pushed that advantage to eight after a pair of Bills free throws at the 7:43 mark but had to hold on for dear life down the stretch.

The Cavs lost point guard Rodney Smith and Stromberg to fouls within 15 seconds of each other with just more than five minutes to play, and the lead would dwindle to two on five occasions as time wound down.

The Pilots cut it to 94-92 with 24 seconds remaining but were forced to foul to stay alive. St. Gregory’s Walter and Shields were both up to the task, each sinking a pair of free throws in the game’s waning moments to snuff out any chances of a rally.

St. Gregory’s (1-0) hosts the Cavalier Classic this weekend. The Cavs take on the University of the Southwest at 8 p.m. Friday and Peru State at 4 p.m. Saturday.