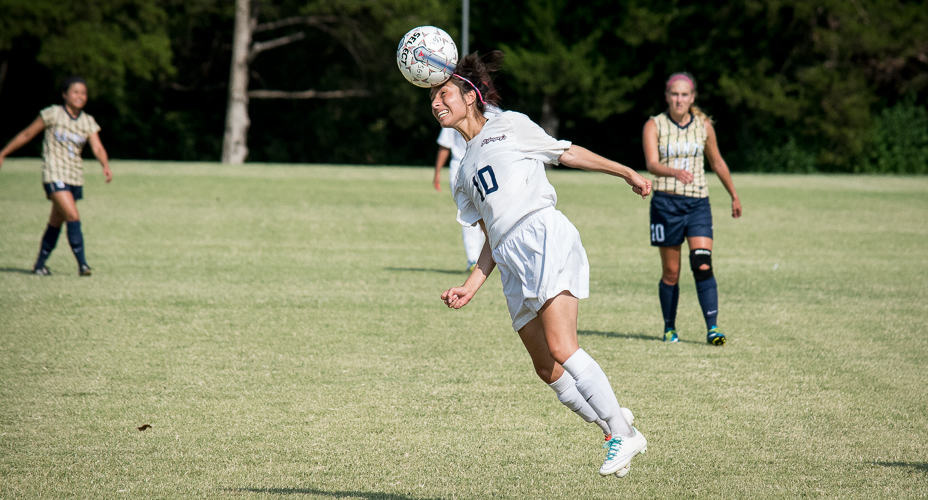 Flores, a junior from Madill, became the Cavs’ all-time leading goal scorer after posting her third career hat trick. In two-plus seasons, she has accumulated 19 goals – surpassing Jennifer Alesch’s 18 from 2009 to 2012.

Flores connected on an unassisted score in the 40th minute to make it 2-0 Cavs. Chloe Murphy played a perfect pass into Flores in the 58th minute to extend the lead to 5-0, and then 12 minutes later, she ran down and converted a long pass from Riley Wilkins to make it a six-goal advantage.

Flores, who tallied a game-high 13 shots, wasn’t the only one to get in on the offensive barrage. Junior forward Abi Housecroft also had a big day, recording her first career hat trick. Housecroft, from England, scored the first goal of the game in the 21st minute before adding the Cavs’ final two scores over the final 14:16.

Wilkins, Murphy and Peta McKenna also found the back of the net for St. Gregory’s, which outshot the visitors, 37-6. The Cavs put 20 of those shots on goal.

St. Gregory’s (1-0) embarks on a Texas road trip this weekend, traveling to Texas College and Wiley College on Friday and Saturday, respectively.

SHAWNEE – St. Gregory’s turned up the defensive pressure in its season-opening 3-0 win over Hillsdale Free Will Baptist College Tuesday at Fr. Victor Roberts Field. The Cavaliers won their third home opener in the last four seasons while recording their first shutout in nearly a year.

A revamped back line allowed only two shots on goal, and the Cavs owned a 22-12 advantage in attempts. Hillsdale managed only one corner compared to SGU’s eight.

Cavalier newcomer Frank Molina gave the home team all the offense it would need just 10 minutes in, heading in a pass from Arturo Flores to make it 1-0. Mark McGrath, a first-team all-conference selection a year ago, added goals in the 49thand 59th minutes to virtually put it away.

McGrath led all players with seven shots, while Molina finished with five. Mark Dunleavy assisted on one of McGrath’s two scores.

St. Gregory’s (1-0) embarks on a Texas road trip this weekend, traveling to Texas College and Wiley College on Friday and Saturday, respectively.