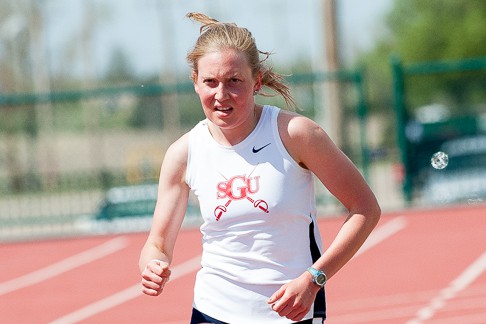 “It feels great to win the marathon,” Kalicinska said. “I couldn’t have done it without the support of my coaches, teammates, family and the SGU community.”

Kalicinska, who led for much of the race, took her first lead at around the eight-mile mark. She extended a 12-second advantage 10 miles in to two minutes at the 20-mile mark. After that point, it essentially became a one-horse race.

“We started feeling pretty good about her chances at the 20-mile mark,” said SGU coach Matt Aguero. “She just kept getting stronger and stronger. You can’t run a marathon much better than Monika did today.
“She went out smart and never hit the wall. It’s great to see her hard work pay off in a national championship.”

Because of her finish, Kalicinska becomes the first women’s track All-American in school history. She claimed the third outdoor national championship and fourth title overall for SGU’s track program.

Kalicinska had the top marathon qualifying time among her competitors entering the national competition. She earned an automatic national qualifying standard April 28 by completing the Oklahoma City Memorial’s half marathon in 1:23.57. Kalicinska was second among female finishers at the event, eclipsing the standard by more than seven minutes.

It was the third national championship meet of the academic year for Kalicinska. She qualified for NAIA nationals in cross country in November and indoor track in February.

SGU’s other women’s competitor at outdoor nationals, Patrice Williams, finished 21st in the long jump Thursdaywith a distance of 5.20 meters.