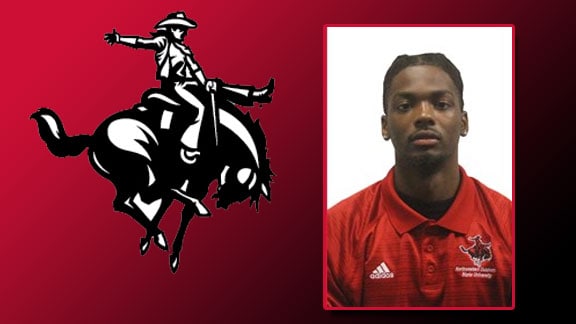 “If I’m fortunate enough I will, but I’m not banking on it or anything like that. I want to, but if it doesn’t happen I wont be disappointed, because I know I gave basketball everything I had.”

Deiondray Martin was musing when asked if basketball would be his career path. He is currently completing his senior year at Northwestern Oklahoma State University and majoring in Mass Communication and minoring in Health and Sports Science.

Martin, born in Detroit, Mich., is from Columbus, Ohio. He began playing sports when he was in the sixth grade. He actually started out playing football until someone mentioned to him that he was pretty tall and should give basketball a shot.

After that, Martin was able to build up his skill set and he fell in love with basketball and continued to play at Brookhaven High School. While there he was a member of the Bearcats and they reached the playoffs every year of high school.

But making the transition from high school basketball to college basketball was a challenge for Martin at first.

Before attending Northwestern, he attended and played basketball for Angelina College for two years in Lufkin, Texas, and while there, he earned honorable mention to All-Region XIV team in the NJCAA.

According to Martin, he realized that the game was much faster and the men that he played against were a lot stronger. Therefore, he made it his mission to get stronger and keep up with the game so that he could play at his absolute best.

He later decided to transfer to NWOSU after speaking and getting to know the men’s basketball coach Northwestern’s (now athletic director) Bradley Franz. It didn’t take long for Martin to realize that he was a Ranger and Northwestern could be his home.

Furthermore, he enjoyed the tight-knit atmosphere Northwestern provides as well as a new experience by living in a new town with different people.

Balancing his schoolwork and being his best on the court can sometimes be challenging for Martin. However, his two-year-old daughter, Deion Marie Martin, is one the main people in his corner that constantly motivates him to work diligently.

“It gets pretty hard sometimes, but when she calls its like nothing else matters,” Martin said.

“She just takes my mind off of everything. It gets tough, but I talk to her and I pray about it and talk to my mom. I try to balance everything out to the best of my abilities.”

Experiencing his senior year is a bittersweet feeling for Martin. Recently he and a few other senior basketball players had a photo shoot. These pictures are used to go on the fronts of schedule cards that are passed out all over the Northwestern campus.

“That was fun, I feel like it was along time coming. It’s about time,” Martin said.

He and the other basketball players had a great time posing for the photo shoot and even got the chance to send some photos to their families.

As for the current season, Martin is very excited. Last week, Northwestern’s basketball team played the University of Central Oklahoma Bronchos. Unfortunately, the Rangers did not rise to the occasion and lost 77-68.

“It was just a tough game for the first game,” Martin said. “It’s the first time people are playing together and we got new transfers and new players and new faces, so it was tough for us ”

However, the team regrouped in the second game and defeated Northeatern State, 91-80.

Martin said he can’t wait for everyone to see just how well this year’s Northwestern Rangers can play.