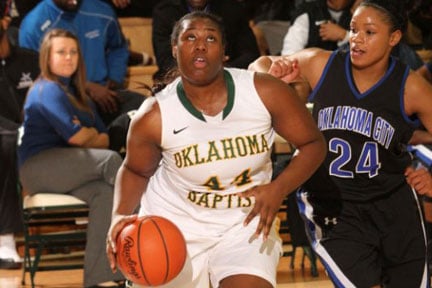 Jalissa Council may be a small town girl, but she has come up big for the Lady Bison this year.

She and her team are garnering more attention as the 2013-2014 season progresses.  Council is picking up individual weekly honors with the nearly same frequency Oklahoma Baptist is putting up wins.

Council’s most recent honor came Tuesday when she was tabbed the NAIA National Player of the Week.  But she chooses to talk about the big win for her team.

“It was really huge for us,” Council said.  “OCU is always a big game every year and just knowing that we can beat them, and with them being No. 3 at the time, it was big for us to make a statement and make our presence known.

“That was probably one of our best games, as far as intensity and just using everything we had.  And I feel like we now know how well we can play and we want to keep playing that well the rest of the season.”

Council did her part in the win, coming up with a career-high 31 points.

The victory for OBU, this week up to No. 5, halted a streak of 35 consecutive regular season league wins for the Stars.  Council said she believes that experience will have lasting benefits for the team.

“It will definitely get us ready for the postseason.

“We’re having to get ready fast and we’re able to see what we need to work on and get it accomplished.  Then when we play the teams again, we can see how far we’ve gone.”

Council can add the national honor to a list that is growing.  She has been tabbed the SAC Player of the Week twice.

The senior is leading her team in scoring at 16.4 points per game.  And Council is one of four seniors on the OBU squad who are all being productive in their final campaigns.

“We have a great group of seniors,” Council said.  “We’re all on the same page.  We’re great players and each one of us leads the team in different ways.”

Council is the only one of the seniors – including Janell Beacham, Allie Brandenburg, and Zbeyda Aremi – to have not started all 16 games.  In fact, she has started none and played in only 11.  But she knows her place on the team.

“My role is being vocal,” Council said.  “I’m really a motivator.

“Sometimes it’s pulling players to the side and saying, ‘You’re OK.  You’ve got this.’  And then it’s just being a presence inside, producing points, getting rebounds and just running the floor.”

She missed five games this season, but since her return has logged big numbers, like scoring 25 points per game in January.

“The coaches at Seminole State were very vocal from the beginning that they were interested in me,” Council said.  “They showed lots of support at my games.  And after visiting, I really liked the campus.  I was able to come and visit the girls and I liked it a lot and felt like I fit in really well.”

She has fit in well in two seasons at OBU as well and likes her relationship with Lady Bison head coach Casi Bays, who is in her second season at the helm, and first full season without the interim tag, after being an assistant there.

“And I really like her style of play.  We’re really a ‘run the floor’ team and we really use our inside and outside presence.  I really like that.”

Bays’ profession has an appeal to Council as well, in what direction she may take after school.

“I hope to find a coaching job somewhere.  And hopefully be able to lead a great team like I was fortunate to be able to play for.”

Council has been an Oklahoma girl and a country girl for “my whole life.”

And she knows it may be different for some coming to college in Shawnee, but she appreciates the pace of life there.

“But in my hometown (Weleetka), it’s really small.  We don’t have streetlights and have just a couple of gas stations.  So Shawnee is like a city to me, it’s like, ‘Wow, it’s pretty nice up here!’

“I’m used to it and I like it.  I love small towns and I like that feel where everyone has each other’s back.”

For someone who puts up big numbers, it’s the little things that make the difference.

“Starbucks, and the fact that I don’t have to travel an hour to get to a Walmart.”