Smith nets 40 as Cavaliers stun No. 24 Pilots in overtime 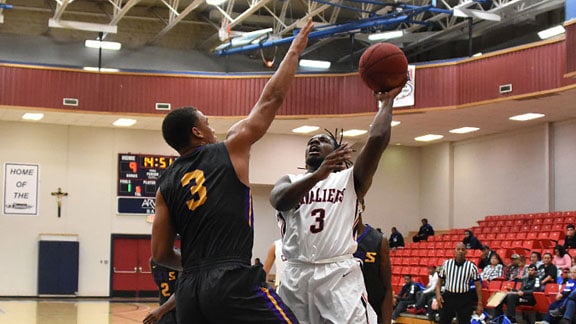 SHAWNEE – Rodney Smith scored a career-high 40 points, and St. Gregory’s overcame a big second-half deficit to defeat No. 24 LSU-Shreveport, 98-91, Friday night in overtime. The Cavaliers won their fourth straight overall while handing the Pilots their first loss of the season.

In a wild affair that featured seven ties and seven lead changes, SGU needed the extra frame to complete its comeback only after LSUS’s Josh Walker nailed a half-court shot as time expired in regulation.

The home team controlled the overtime period, outscoring the Pilots, 12-5. Smith had eight of those, capping a 12-for-17 night from the field and 16-for-16 game from the free throw line. It was the second consecutive contest he’d eclipsed his career high.

Smith had 26 points between the second half and overtime, accounting for 24 of his team’s final 38 tallies.

The Pilots (5-1) seemed in control late, pushing their lead to 74-58 with 11:58 to play after a pair of Tyrell Springer free throws. The Cavs, who made only five of their first 18 second-half shots, sprung to life over the next eight minutes – outscoring the visitors 18-4 to get to within 78-76.

Following a defensive stop, SGU took the lead at 85-83 with 2.5 seconds left on two Smith free throws. LSUS was assessed a technical after calling a timeout when none remained, and Smith added another charity toss to make it 86-83 with 1.1 ticks left.

That’s when Walker hit a turnaround mid-court shot to force the extra frame.

The Cavs shot 49 percent for the game while holding LSUS to 44 percent – including 37 percent in the second half and overtime. SGU hit 93 percent of its free throws (25-for-27).

Smith was one of four Cavs in double figures. Tyler Tucker had 20 points and eight rebounds, while Jordan Rutherford finished with 14 points and 13 boards. Michael Maras totaled 12.

Cameron Biedscheid led the Pilots with 24 points and nine rebounds.

A late first-half run propelled the Pilots to a 52-46 lead at intermission. After a Rutherford trey put the home team up 33-32 with 7:02 left in the period, LSUS responded with an 18-7 run to swipe the momentum.

SGU shot 51 percent in the first half while the Pilots finished at a 50-percent clip that included seven makes from distance. Smith led the Cavs with 14 points on 5 of 7 shooting in the opening 20 minutes, while LSUS’s Benjamin Batts tallied 14 on 6 of 8 from the field.