Smith scores a game-high 22 as Cavaliers rally past Bison 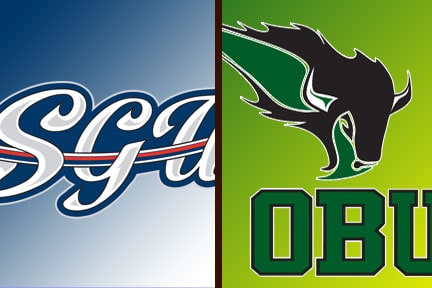 SHAWNEE – St. Gregory’s rallied late to get past rival Oklahoma Baptist, 74-71, Friday night at the Noble Complex. The Cavaliers won for the third straight time on the road in the “Holy War” series and fourth time in the last five outings with the Bison.

SGU (2-2) trailed by as many as 12 in the second half after struggling to find its rhythm on offense. But down 63-55 with 6:39 to play, the Cavs closed the game on a 19-8 run to seal the deal. SGU made six of its last 12 shot attempts in addition to converting its final six free throws.

The visitors grabbed their first lead since early on after a Pablo Bianchi trey and a pair of Trey Tucker free throws made it 68-67 with 2:05 left. The advantage was three on three separate occasions down the stretch for the Cavs – the final time following a pair of Rodney Smith free throws with 10 seconds on the clock.

OBU’s Kevin Franceschi hoisted a contested three-point attempt from the left wing as time expired, but it was well off the mark.

Smith led all players with 22 points – 12 of those in the second half. He was 6-for-12 from the field and 10-for-10 from the charity stripe. Jordan Rutherford had a 14-point night that included going 6-for-6 from the free throw line. Tucker (10 points, 11 rebounds) and Bianchi (12 points, 11 rebounds) recorded double-doubles.

Francheschi led the Bison with 15 points on 6 of 17 shooting. Chandler Rickey tallied 14 on a 6 of 8 night. Steven Green finished with a 13-point, 12-rebound double-double for the Bison, who had a nine-game winning streak in home openers snapped.

SGU finished at only 33 percent from the field compared to OBU’s 44 percent, but the Cavs owned a 50-40 edge on the boards – including 14 second-chance points off 18 offensive rebounds. The visitors also converted 14 Bison turnovers into 19 points.

SGU dug an early hole, trailing by as many as 11 in the first half. Down by nine, the Cavs went on a 6-0 run to get to within 31-28 after a Smith bucket with 2:31 left, but the Bison countered with a run of their own to end the period.

OBU scored 10 of the frame’s final 14 points to take a 41-32 lead into intermission. The home team held the Cavs to just 27 percent shooting in the first half. SGU had a 28-23 edge on the boards.

Both Smith and Rutherford netted 10 points to pace SGU in the opening 20 minutes. Green led the Bison with 11 points and nine boards.