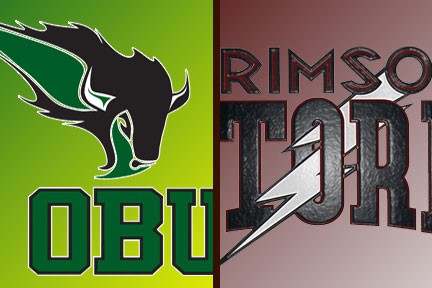 BETHANY — It hasn’t been an easy transition for Southern Nazarene coming into NCAA Division II across the board. Nowhere has it hit harder than on a group of guys who step out of their field house on the corner of 50th and Stinchcomb, and head on to the field day after day.

Southern Nazarene football was met with a 2-9 season in its first year away from the NAIA in 2012, and once it joined the Great American Conference schedule, it didn’t find a win in the first two seasons. This year started with a 22-game losing streak, that before Saturday afternoon, had stretched to 32 games. After Saturday though, two words can simply describe the weight of emotions that flowed from Bethany.

The streak has been stopped at 32 as Southern Nazarene took down Oklahoma Baptist, 33-32, in overtime to score its first victory since the final game of the 2012 season. It was the first victory for the Storm (1-10, 1-10 GAC) over an NCAA Division II opponent since becoming a member and the first win over a Division II opponent since Oct. 29, 2011.

“We finally got the monkey off our back after all the hard work,” said SNU Head Coach Craig Hubbard. “We came close to breaking the streak several times last year and we finally got it down. I am happy for these guys and our seniors who get to leave with smiles and excitement. I am proud of these men for not quitting.”

In the game, just like the past four years though, nothing came easy for SNU. The Crimson Storm scored first for the third time this season as James Mauro hit Johnathan Martin to cap off a 13-play, 84-yard drive to give SNU a 7-0 lead. The Storm took a 9-0 lead with 1:13 left in the second quarter after the Bison (2-9, 2-9 GAC) lost a snap into the end zone.

On the ensuing kickoff, SNU took the ball with 1:06 left in the half at the OBU 46-yard line. Maruo then hit Chris Hudsonon the second play of the drive for a 34-yard pass to give SNU a first down at the 12. Daniel Ramos III then punched it in to put the Storm up 16-0 and SNU carried that lead into the half.

The Bison though answered with a big third quarter as it scored 20 straight to take a 20-16 lead into the fourth. SNU had one play in the third from its own 12 which was a 23-yard run by Terence Olds. That run started a momentum-gaining drive by SNU that paid off with a 29-yard touchdown pass from Mauro to Elden Coleman Jr. on a third down-and-8. That gave SNU a 23-20 lead early in the fourth.

Neither team put a drive together until the Bison began to march with 1:57 left to play. OBU used nine plays, 1:27 off of the clock and converted on a fourth down before it found the end zone to take a 26-23 lead with 30 seconds left to play.

Life began to spring back up in SNU when the Bison missed the point after attempt. Then on the ensuing kickoff, OBU was called for unsportsmanlike conduct and gave the Storm the ball at the SNU 40. On the first play of the drive, Mauro hit Jacoby Hicks on the right side with a 15-yard pass at the OBU 45. Hicks then executed a perfect hook-and-ladder to Martin who flew right up the Storm sideline to the OBU 21. SNU got three more yards on a Mauro rush before freshman Carlos Anguiano drilled his sixth field goal of the year, a 35-yard punch, to force overtime.

“At the half I told the guys correct me if I wrong, but there’s no prize for winning the first half,” said Hubbard. “We need to win the game. In the fourth, after we got down, I could tell some talking was going on. I just gathered the team together and told them we are going to win this game together.”

In overtime, the Storm needed just two plays to find the end zone as Olds took it to the house from 25 yards out and the Storm were up 33-26. Oklahoma Baptist then converted on a fourth-and-3 before punching it in on a 2-yard run. After missing its previous PAT, OBU went for the win and the 2-point conversion. Dezmond Stegall’s pass though was just out of the reach of his intended receiver in the corner of the left side and the Storm broke loose from the sidelines.

“The thought on the sideline heading into overtime was this is it, this is the one we are going to win,” said Hubbard. “After Terence broke off that run we knew this one was ours. It really couldn’t end in a better way than a defensive stop though in the mind of a defensive coach.”

Olds rushed for 160 yards and a touchdown on 26 carries. It was the most yards rushing by an SNU player since Branden Smith had 162 yards against Bacone in 2008. The Storm had 198 total rushing yards as Ramos III added 40 yards and a touchdown on eight carries. James Mauro threw for all 234 of SNU’s yards through the air. The junior was 15-for-33 and had two touchdowns. It was Mauro’s second-highest total for passing yards in his career.