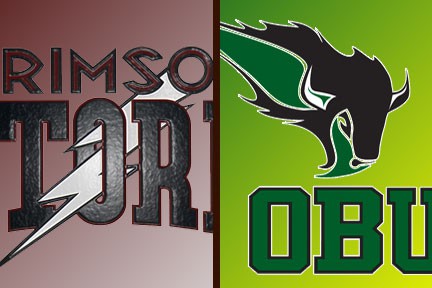 SHAWNEE — For the second straight year Southern Nazarene ended its season with a win and did against Oklahoma Baptist Saturday in a 20-10 victory on Homecoming day in Shawnee.

The win for the Crimson Storm (2-8) gives SNU its first multiple-win season since the 2012 season. Jacob Spady threw for three touchdowns and had 205 total yards passing as he was 16-for-24. It was the first time since Dylan Terry threw for three touchdowns in the 2012 season. The sophomore also led the team in rushing with 66 yards on 20 carries. Daniel Ramos III ran for 56 yards on 22 carries.

Spady hit Reese Carlson and Derrick Arrington six times each as Carlson had 77 yards receiving and a touchdown while Arrington had 59 yards receiving. Jacoby Hicks had just two catches, but both were for touchdowns.

The Crimson Storm struck first on a 38-yard touchdown pass from Spady to Hicks to put SNU up 7-0. That drive as a 6-play, 50-yard drive. That wasn’t Hick’s only touchdown of the quarter as the sophomore pulled another touchdown pass from Spady to put SNU up 14-3 with 1:27 left in the quarter. The touchdown capped a 9-play, 70-yard drive. The Bison though cut it to 14-10 early in the second as that score carried into the half.

The Storm answered early in the second half when Spady threw for his third touchdown of the game with a 32-yard strike to Carlson to end an eight-play, 74-yard drive and put SNU up 20-10. The Crimson Storm defense took over from there as it held OBU to just 109 yards in the second half.

The Storm finished with 351 total yards, the second highest of the year, as they ran for 146 and threw for 205. SNU also held the Bison to just 301 yards with 109  on the ground and 192 through the air. It was the lowest offensive output for a Storm opponent since SNU held Southwestern Oklahoma State to just 295 yards in the 2014 season.