Softball in the Sooner state is strong again this season 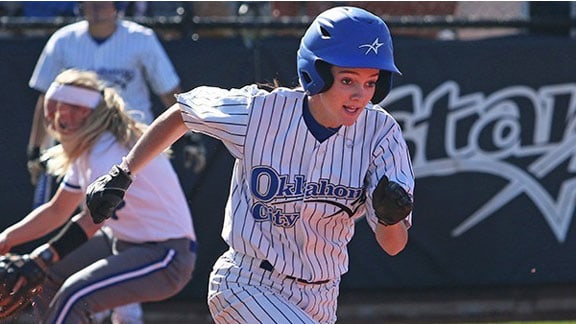 If you are not following college softball in Oklahoma yet, don’t wait until the playoffs to get in on the action. There is a lot to be excited about on all levels in the state.

Any softball discussion in Oklahoma needs to start with the Oklahoma City Stars, whose winning ways this season include a 29-0 start for legendary coach Phil McSpadden. OCU appears to be heading to its 25th consecutive NAIA national tournament – 30th overall – and looking to add to eight national titles.

The second-ranked Stars (34-1) have three pitchers that are combining to average and ERA of 0.99, the best in the country, and are also leading the country in team batting average at .397.

St. Gregory’s (19-3) is right up there in the mix as well. In fact, the No. 4 Cavaliers are responsible for the lone blemish on the OCU record this season.

No. 24 Central is 24-10 and third in the MIAA, with a team batting average of .377, second in the country in D-II. Cameron is third in the LSC and 25-12 overall. The Aggies just gave No. 1 West Texas A&M its second loss of the year. CU’s Sonora Zukerman has 10 doubles and nine home runs at the midpoint of the year. Southeastern (20-12) swept its first four GAC series and is third in the league .

Oklahoma is 23-6 and ranked in the top 25 again. The No. 13 Sooners have won five in a row heading into Big 12 play, which opens on Wednesday against with a Bedlam matchup in Oklahoma City.

Oklahoma State (17-12) will come into that conference opener on a five-game winning streak as well.