Sooners escape with 63-62 victory over ORU 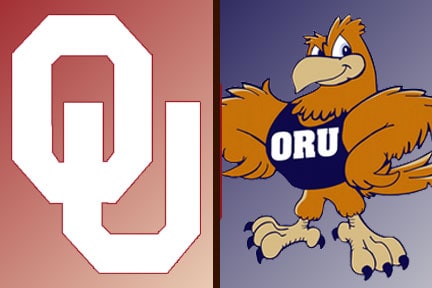 TULSA, Okla.-Oral Roberts led for the majority of the game, but it was Oklahoma who was ahead when it counted as the Sooners led at the buzzer taking a 63-62 victory on Wednesday night at the Mabee Center.

Warren Niles got back on track offensively for ORU (3-4) with 21 points, while Shawn Glover scored 17, one short of a career high. Steven Roundtree added 14 points and eight rebounds for the Golden Eagles.

It was a more balanced attack for the Sooners (5-1), who overcame a 10-point deficit over the final nine minutes to end ORU’s 24-game regular season home court winning streak. Amath M’Baye had 12 points and nine rebounds, while Romero Osby and Buddy Hield each had 11.

For the first time since the season opener, ORU was out-rebounded by its opponent as the Sooners held a 37-33 edge, including 18 offensive rebounds, which resulted in 17 second chance points. OU’s bench also proved to be a factor, outscoring the ORU bench 26-0.

“Tough loss,” said Coach Scott Sutton. “It never gets easier losing that type of games. We made too many mistakes to beat a good basketball team. You can’t get out-rebounded in the second half and give up 18 offensive rebounds and expect to win. I told our guys I’m proud of how they competed, I thought they played with great energy. I thought they played together. The challenge now is if this team can carry that forward and if they do we can be a very good basketball team.”

Despite a frenetic pace, with eight combined turnovers in the first nine minutes and poor shooting percentages, points were tough to come by early, but ORU opened up a 15-7 lead midway through the first half after a 3-ball from Niles.

Still holding an eight-point lead at 25-17 after a long Damen Bell-Holter jumper, OU scored five consecutive points, including a three-point play by Je’Lon Hornbeak to make it a 25-22 game with 5:41 to go in the first half.

Niles stopped the mini run with a 3-pointer of his own, and the lead would not get under three for the remainder of the first half as ORU took a 35-31 lead into the break.

It was Niles again helping the Golden Eagles’ cause as he knocked down three free throws, then laid in the inbounds pass after Roundtree deflected it under the basket, giving ORU its biggest lead of the game at 42-33.

The two teams traded runs with OU scoring six-straight to make it a three point game at 42-39 before a Bell-Holter dunk sparked a 6-0 run for ORU to push it back out to 48-39. A Glover jumper would give ORU its largest lead of the game at 10 (54-44) midway through the second half.

Until a 15-4 run in the second half, ORU had been able to withstand each Sooner outburst and maintain its lead, but a 3-pointer by Pledger gave OU a 59-58 lead, the Sooners their first lead since the 14:30 mark in the first half when it was 7-6.

Down three with a minute to go, ORU got a basket by Roundtree to make it a one point game, and after retrieving an offensive rebound off a missed free throw, the Golden Eagles had a chance to hold for the last shot. Glover had a good look but his shot with three seconds on the clock rimmed out and the Sooners escaped the Mabee Center with a victory.

It is back to the road for ORU as they face a three game road stretch, beginning with a trip to Springfield, Mo., to face Missouri State on Saturday, December 1 at 4:30 p.m.