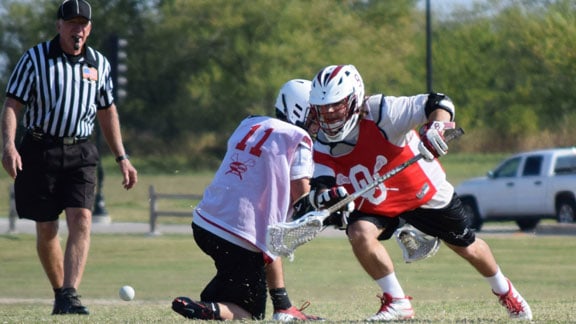 The University of Oklahoma Men’s Lacrosse program has been competing since 1978 but has never experienced a season like this one in their nearly 40 year history. Between 2006 and 2014, the Sooners compiled a 44-59 overall record and a 19-31 record in the Lone Star Alliance (LSA) Division I North. This year, however, the Sooners have cruised through their season carrying an 11-2 overall record after going a perfect 5-0 in the LSA North to claim their first-ever division crown.

Although the Sooners won their first two games against Tulsa and St. Gregory’s by a combined score of 43-5, it wasn’t until their third game of the season that people began to take them seriously. That third game was against perennial LSA power Southern Methodist. The Mustangs had not lost an LSA North game since 2009, but the Sooners put together a complete game on the way to a 15-8 victory in Norman. 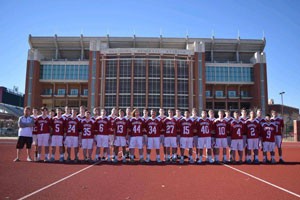 The Sooners opened the game with a quick five goals before finishing strong with six goals in the fourth quarter. Dylan Ikkala scored over half of OU’s goals with eight to his credit, while Nick Ierullo cut through the SMU defense to set up his teammates for five assists. Ryan Echavarren was a wall in the cage, recording 17 saves as the Sooners sent a message heard around the league.

“The win against SMU definitely propelled us,” Ierullo explained. “The underclassmen didn’t really understand what it was like losing to them the last three years, but the seniors really tried to set it as a goal for us to accomplish this year. We wanted to show our improvement and I think that’s what it’s done. It showed we can rise to the occasion.”

Though the Sooners stumbled in the next game on a rainy night in San Marcos, Texas to Texas State, the win against SMU set the tone for the season. OU would close out the season winning six straight games and eight of their last nine games.

Offensively, it’s been an historic season for the Sooners. At the end of the regular season, OU was just one of four teams that scored at least 200 goals, joined by Brigham Young, Boise State and Louisiana State. That 200 figure would be significant for another reason as well, as senior Ierullo became the first Sooner with 200 career points. He currently sits at 201 points, and will look to add to that total as OU approaches the LSA playoffs.

“It’s definitely been with the help of the supporting cast,” said Ierullo. “The senior class has really developed over these last four years and our chemistry has made it really fun to play with the players out there. I’m just happy to put points on the board.”

Ierullo, however, was not the only Sooner to enjoy success this season. Four of his teammates finished with at least 30 points, including senior attack and captain Mason Moore, junior attack Ikkala, sophomore attack Matt Hammond and freshman midfielder Eddy Arnold.

“It really comes down to the unselfish nature of the players we have on the team,” explained OU head coach Brendan Klein. “Nick Ierullo was a prolific attackman in his first three years on campus. As we moved into the season, I thought we needed more productivity in the midfield, so we moved him over. Combined with some of the other guys, no one really cares who gets the points as long as we put points on the board.”

Defensively, the Sooners allowed the fifth fewest goals in LSA DI with 112. OU relied on a pair of freshmen goalies in Echavarren and Stephen Sweeney, and they combined for an average of 14.5 saves per game. On the ground, the Sooners collected 411 total ground balls, led by senior captain and faceoff specialist Ryan Thyrring with 63.

With their No. 1 seed locked up, the Sooners will be prepping for their third straight LSA playoff appearance on April 18 against Texas A&M. OU has collected just one win over their last three playoff games and were eliminated by Texas A&M last season in the first round. However, the team has been focused in the lead up to the playoffs and certainly has momentum on their side as they approach the game.

“It’s huge,” said Klein. “This momentum reinforces the very nature by which we practice. The intensity has been ratched up the last couple of days and the attention to detail is there. It shows they have confidence and a belief in the system we play by.”

“I think the postseason is such an exciting time because you have to take it literally one game at a time because it could be last. I think this group is special because it wants to win, but they want to win so that they can play just one more game with this team. I expect us to have a lot of fun and be very successful knowing that they’ll leave it all out on the field for their teammates.”