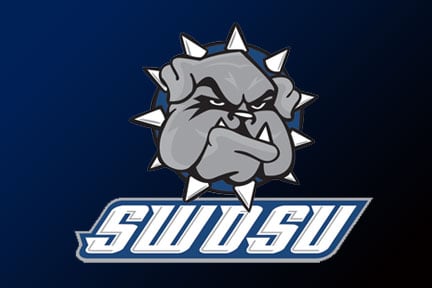 WEATHERFORD – Hailey Tucker scored 21 points in the first half and Hayden Priddy poured in 17 after the intermission as the Lady Bulldogs routed Lubbock Christian – the reigning NCAA Division II National Champions – by a score of 90-63 on Saturday afternoon at the Pioneer Cellular Event Center.

Tucker set the tone with five three-pointers in the first quarter as SWOSU built a 26-9 lead after the opening 10 minutes of play. Lubbock Christian responded and outscored the Lady Bulldogs 24-16 in the second quarter, cutting the deficit to single digits at the break as SWOSU led 42-33.

The Lady Chaps had another high-scoring quarter in the third, but SWOSU still managed to extend their lead before running away with the game in the fourth quarter by outscoring LCU 22-9. The 90 points scored by the Lady Bulldogs matches their season-high, which was set against Missouri Southern on Nov. 13.

Tucker and Priddy both filled up the stat sheet on Saturday. Tucker matched her season-high with 26 points while adding eight rebounds, five assists, five steals and one blocked shot in the victory. Priddy also did damage in multiple facets of the game, totaling 22 points, five rebounds, five assists and three steals while playing the entire 40 minutes. Tyra Aska added 10 points while 10 different players scored for the Lady Bulldogs.

“We were due for a good shooting night after our performance on Thursday,” SWOSU Head Coach Kelsi Musick said after the game. “This was a huge win for us, beating an opponent of Lubbock Christian’s caliber and putting forth that strong performance in front of our home crowd is huge for our young team.”

With the victory, the Lady Bulldogs close out the first semester with a record of 6-3 and they return to action on Jan. 2 against University of Science and Arts at 5:30 pm inside the Pioneer Cellular Event Center.