Southeastern falls 27-24 to No. 12 Ouachita Baptist 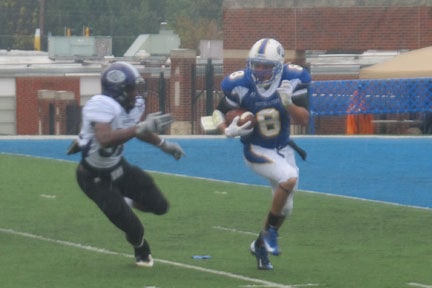 Durant, Okla. – The Savage Storm shook off a big loss from last weekend and showed plenty of heart on homecoming.  But No. 12 Ouachita Baptist held on for the 27-24 win Saturday at Paul Laird Field in a game that proved to be evenly matched.

SOSU falls to 1-3 on the season and 0-3 in Great American Conference play.

OBU capped an eight play, 65-yard drive with a 4-yard touchdown pass with 9:44 remaining in the fourth quarter that put the Tigers up and would be the game’s final score.  Third-string Tiger quarterback Ty Towers narrowly eluded three Storm defended in the OBU backfield and desperately heaved the ball to Chris Rycraw for the game-winning play.

Southeastern quarterback Jercolby Bradley picked up 135 yards on the ground and became the first Storm runner this season to top the century mark rushing.  Bradley also added 181 through the air on 16-of-29 passing with one touchdown strike.

“We played hard and we had our chances,” Richards said.  “The game really could have gone either way.”

The statistics showed an even game in many areas with each team having three touchdowns, while OBU had the slight edge in total offense, outgaining SOSU 395-360.

Both teams attempted two field goals – the Tigers made both, the Storm made only one.  The other attempt was blocked at the end of the first half, leaving a three-point differential that proved to be the difference in the final score.

There was precipitation throughout the afternoon, which had an effect on more than just the homecoming ceremony.

“It was a scrappy game, but I think the rain did affect the ball as the game went on,” Richards said.  “The game just went back and forth throughout.

“And there were a lot of penalties.  And they really hurt.”

Both sides suffered through penalties.  OBU was penalized nine time for 71 yards and SOSU had 10 penalties for 91 yards.  The Storm’s setbacks seemed to come at more crucial times.

On defense, Izzy Eziakor was credited with 13 tackles.

“We’re right there,” Richards said.  “We’re just inches away from becoming the team that I believe we can be.  We just have to keep fighting the fight.”

Southeastern takes to the road next Saturday for the first of two consecutive away games.  The Storm will face Arkansas Tech in Russellville, Ark., at 6 p.m.