Southeastern falls to Golden Suns on the road 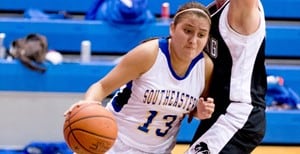 RUSSELLVILLE, Ark. – Arkansas Tech caught fire in the second half and erased Southeastern’s halftime lead en route to handing the Savage Storm an 81-68 loss on Saturday afternoon in Russellville, Ark.

The loss dropped SE to 6-11 overall on the season and 4-7 in Great American Conference play.

The Storm spread its offense around with Bailey Welch and Ronay English each reaching double-figures at 11 points.  They were followed by Emily Williams at nine points, Taylor Richards with seven and three others with six.

English hit three three-pointers in the game, while all of Welch’s points came from the free throw line.

Richards guided the offense to the tune of six assists.

The difference after halftime came due to a 64.5 percent shooting mark in the second half by ATU, offsetting a 41.7 percent effort in the half by the Storm.

SE opened the game with a 4-0 lead and maintained the advantage until ATU knotted the game at 9-9 with 13:33 to play in the half.

Bailey Welch would put SE back in front, but a pair of free throws from Caroline Eubanks put the Suns up by one point for the first time in the game.

Ronay English would answer with a three pointer, but ATU would knot the score at 13-13 with a pair of free throws at the 12:06 mark.

The teams would trade buckets and the lead until SE turned a one point deficit into a 26-19 lead on the strength of an 8-0 run capped by a Williams three.

The Storm would eventually push its lead out to 33-22 on a Schaefer free throw with 2:14 to play, but ATU would score the last eight points of the half and SE would take a 33-30 lead into the locker room.

SE maintained a lead early in the second half, pushing the advantage back out to eight point twice in the early going, the last coming on a Richards layup with 17:29 to play that made the score 42-34.

Southeastern answered and closed to with a pair on a Welch free throw with 10:45 to play, but the Suns used a 12-3 run to mount its first double-digit advantage of the contest.

That was as close as the Storm would get, however, as ATU would outscore SE 14-7 to fashion the 81-68 final.