Southeastern holds on for win over Central 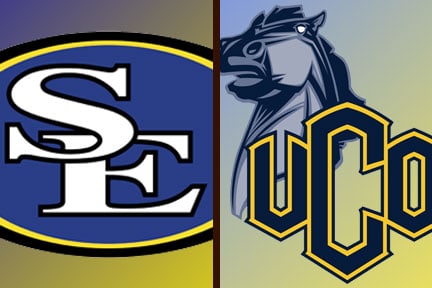 Southeastern’s Mindy McElroy picked up the win over Central’s Kalynn Schrock and the Savage Storm is one win away from moving on to the Central super regional series.

SOSU won 5-4 on the strength of 6.2 innings pitched by McElroy, who also had an RBI on a sacrifice fly in the fourth, which proved to be the game-winner.

The Savage Storm kept the defending national champions off the board through the first four innings while building up a five run lead.

Haley Strawn went 2-for-2 with a two run homer in the first and scored again in the third.

But the Bronchos would not go away quietly.

Schrock bore the brunt of the SOSU offense, but went only five innings and picked up the loss.

Tori Collet followed a 5-for-5 day on Friday by going 2-for-3 with an RBI on Saturday.

The Bronchos threatened in the bottom of the seventh.  Zuckerman homered to bring UCO to within one, 5-4.

Jacee Bennett then came in for the Storm with two runners on and forced Sam Cool to line out, ending the rally.

Southeastern plays next on Sunday at 11 a.m.

Central will face the winner of Minnesota-Mankato and Emporia State in an elimination game at 3 p.m. today.