Southeastern picks up win over Bulldogs 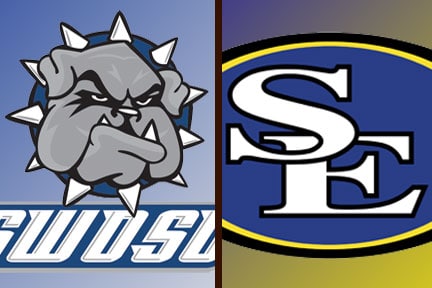 SE will look to even its record on the year when it heads to Monticello, Ark., for a 3 p.m. matchup at Arkansas-Monticello on Oct. 27.

The Storm continued to use its pounding running game to hold the ball for more than 33 minutes and pile up 278 yards rushing, topping the 250 yard mark for the fourth time this season and the third time in-a-row.

Jercolby Bradley led the charge on the ground with 17 carries for 93 yards and one score, while CJ Kirk added 89 yards on 15 carries.  Ladarius Abrams chipped in 70 yards on 15 carries and Don Brown toted the ball five times for 32 yards.

Bradley also had a fair day through the air, hitting 12-of-19 passing for a pair of touchdowns and 149 yards.

Krishon Daye hauled in four of those passes for 26 yards and a score, whileAnthony Foster added a pair of receptions for 47 yards and a TD.

The SE defense was solid on the day as well, forcing three turnovers and picking up three sacks.

That defense was paced by Jacobi Crowley and Derek Ogg who each tallied seven tackles.  Crowley added half a tackle for a loss, while Ogg was busy in the backfield with 2.5 tackles for loss, a pair of sacks and a forced fumble.

That SE defense wasted little time making its presence felt with Clay Watersforcing and recovering a fumble on SWOSU’s third play from scrimmage.

The Storm would take advantage of the field position at the Bulldog 37 yardline and march it down to the two before Chris Peoples would connect on the first of two field goals in the contest, this one from 19 yards away.

Southeastern would force SWOSU to punt on the next drive and drive the ball back down the field, covering 31 yards on seven plays before Peoples pushed the advantage to 6-0 with a 32 yard field goal with 5:45 to play in the first quarter.

The Bulldogs answered just over a minute later when Dustin Stenta connected with Kirk Jones for a 45 yard TD pass, but the PAT by Colton Rainey would miss wide left and the score would stay tied at 6-6.

SE would waste little time answering themselves with Bradley finding Foster down the right sideline for a 41 yard TD toss that set the Storm up with a 13-6 lead that they would hold after one quarter of play.

The Bulldogs would again even the score at 13-13 when Ryan Corbin hauled in a seven yard TD toss from Stenta to cap a 10-play, 75 yard drive that ate 4:49 off the clock.

Southeastern, however would get the last word in the half as well with Bradley finding Daye over the middle for a 14 yard TD strike with 1:10 to play in the half, but Peoples’ first missed PAT of the season would leave the Storm with just a 19-13 lead at halftime.

SWOSU would narrow the SE advantage to 19-16 with a Rainey field goal with 12 seconds to play in the third quarter.

The Storm defense would get tough in the fourth quarter, holding the first Bulldog possession of the final frame to a turnover on downs thanks to back-to-back sacks after Southwestern Oklahoma had moved into the redzone.

Sanders would snag the second of his two interceptions to end the next SWOSU drive on the second play with a pick at the SWOSU 46 yardline.

The Storm would take advantage of the turnover and drive the ball 46 yards in 11 plays and ate 3:39 off the clock before Bradley scampered in from 11 yards out to ice the 26-16 Storm win.